In an interview for Formula1.com Toto Wolff talks about expectations at Mercedes.

“As they (Mercedes) know I have put my neck on the line they know that I have no room for failure. Not only have I taken a personal risk by leaving Williams – where I have enjoyed working – but there is also a financial and economic side to it. There is a huge amount of trust on both sides and I am very happy having joined.”

I’m not really sure what Toto is inferring here, “You cannot run a Formula 1 operation in the UK out of Germany. It is not only a difference in mentality – there is definitely a difference (laughs) – but it is also about physically being there.

Running a company from a distance never really works, so the question is either you run it full time or you don’t. And if you don’t, then you rely on management. In the past I have done that, but it was not the role Mercedes had envisioned for me.”

I wasn’t aware the team was previously run from Stuttgart, so the comparison Wolff makes appears to be a moot point. Toto then wishes to clarify the management structure because he claims the media made a big deal over this a couple of weeks ago and it is really this simple. 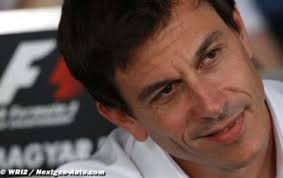 “Niki is the non-executive chairman of the board which means that he heads the board in non-operational, non-executive functions. He is a triple world champion; he is a good negotiator and he has good relationships. He is very straightforward and direct and is somebody who will be looking after the team. He is chairing the board but it is less of an operational function.

Nick Fry is still the CEO, and as my role is twofold – on one side I represent Mercedes-Benz as their head of motorsport, on the other side I am a shareholder within the team – I will fit in the senior management.”

Thanks Toto for clearing that up???

According to Bilde, Nico’s feet are rather too large for the Sauber foot well making it uncomfortable for him when operating the pedals. The monocoque cockpit cannot be redesigned.

“We have cut the rubber soles back at the heels to give us some more space”, Hulkenberg comments.

Blick the Swiss publication reports that when asked which of the 2013 cars had most surprised him, he replied “The Sauber! Just like 2012, they have made a good car again.”

When I was in Jerez looking down on the pit lane, the styling of the sidepods is even more remarkable. relative to other designs it looks as though it doesn’t have any at all.

For 2013 Pirelli has re-designed the 4 dry weather tyres. Each is roughly a step softer than those used in 2012. The tyres have been structurally re-designed to make them easier to warm up as we saw Jenson prove when he delivered his fastest lap of the day in Jerez on the first flying lap.

The tyres will degrade more than the 2012 versions and Pirelli is targeting a mix of compounds for each race weekend that will force the teams into at least a 2 pit stop strategy. Each driver has 6 sets of the harder compound and 5 of the softer compound for all practice sessions, qualifying and the race.

As we saw in Jerez, all of the slick tyres have improved performance and are faster by up to 0.5 seconds per lap. The performance gap between the different compounds is also at least half a second, in order to enhance race strategy and differences in speeds during each race.

“In Australia, the P Zero White medium and P Zero Red supersoft tyres will be nominated: the first time that Pirelli has nominated the softest compound in the range for Melbourne. The full step in the compound choice should ensure a performance gap between the cars that allows strategy to come into play.

“The choice of the P Zero Orange hard and P Zero White medium for Malaysia – the two hardest tyres in the range – will cater for the high temperatures and abrasive surface that is a well-known characteristic of the Far Eastern track.

“The P Zero White medium and P Zero Yellow soft tyres are nominated for China: the best choice for the comparatively high degradation expected as a result of the demanding track layout, which leads to close racing.

“Like Australia, Bahrain has a brand new nomination this year compared to last year: P Zero Orange hard and P Zero Yellow soft. This is designed to ensure plenty of speed in qualifying coupled with the durability needed for the race, which is again often held in high temperatures.”

Ecclestone and the ‘appearing’ evidence

I have to say I’m staggered at the scale of this black ops mission as ‘Spot the BE clone’ has for a second consecutive day unmasked a cyber being in the image of our glorious leader. This one was fairly easy to spot though due to the utter absurd and unbelievable claims they make.

A document, never seen or heard of previously, has apparently emerged suggesting CVC offered way more than anyone else for the rights to F1, even though they actually paid substantially less than this offer at the end of the day.

PitPass.com today report that “It was a big gamble for CVC [to invest in F1] but it has paid off. Core to its success has been Ecclestone’s position as F1 boss and one wonders if the sport would be in the rude health it was today if it had been sold to another buyer that did not want him running it.”

The news behind this story is that after years of legal rumblings, CVC have finally managed to find a missing document (Abracadabra) that exonerates all and sundry of any behaviour not whiter than white – Bayern LB, Gribkowsky, CVC, Max M, Bernie and Bambino Trust – in the sale of F1 commercial rights in 2005.

Ecclestone is facing 3 different legal challenges, one in New York, one in London and the biggie has yet to be listed in Munch. Should the state prosecutors in Germany choose to pursue Bernie, this could be the legal battle that renders both CVC’s and Ecclestone’s legitimacy to the commercial rights of F1 null and void.

No wonder CVC have shipped between 28-45% of their shares in FOM (I’ll call it this to save detailed breakdowns of minute detail) in 2012 alone.

The errant document that surfaced was filed today was with the UK courts and relates to matters covered in TJ13 article “Yet more legal trouble for Ecclestone”. It is apparently a letter of offer from CVC to buy the F1 commercial rights for way more than any one else.

“You will note that the proposal is for $1.5bn for your holding of 71.65%. This is an improvement on the previous offer  which valued 75% at $1.5bn. This improvement can only be justified if there is some positive news or information about the business we are proposing to invest in. I look forward to hearing it.”

The question I would pose is, ‘what was the ‘positive news’ they appear to be soliciting? It didn’t come and this offer was never completed, rather a deal for much less was finally struck. I suggest this is a fabrication and this question was never asked.

The newly discovered letter continues, “It is a condition of our offer that Bernie Ecclestone continues as the company’s Chief Executive and we would wish to support his plans for developing the business”. The ‘new’ cloned Pitpass then comments upon this clause saying, “with hindsight this has proven to be a sensible decision, though all in a day’s work for Ecclestone”.

Pitpass then critices the German prosecutor’s for not understanding Ecclestone’s motives. They claim Bernie is a penny pincher and would never consider paying Gribkowsky $44m just to stay in his job. In fact Pitpass go further suggesting it would be more in Ecclestone’s nature to demand $44m to continue his work. Such facile reasoning I have never heard before in my life.

Then as if to prove nobody was ripping anyone off we have the following offer from CVC to the Bayern LB bank.

“I am pleased to set out below a proposed offer under which a new company (‘Newco’) formed by CVC Capital Partners Limited will… buy the whole of your interests in Formula One… The proposed offer for your combined holdings of 71.65 per cent of SLEC is $1.5bn… As a condition of this offer Bambino or the Ecclestone family will reinvest at completion $100m into the share capital of Newco for a 10 per cent stake… BayernLB may also invest $100m at completion in Newco for a 10 per cent stake.”

Pitpass then infers Bayern LB were short sighted for not taking up their option of a 10% share in F1. Is it possible a media outlet could blindly attempt such uncritical propaganda in praise of the handling of all things F1 by Mr. E?

The truth is, someone half as competent as screwing everyone for each last penny who may have been employed on $5m salary a year would now have promoters paying enough hosting fees to make a reasonable profit, Free to air TV companies still able to afford to broadcast F1 and the teams would have a greater share of the revenue.

Why? Because the incremental $7.5bn raised over and above what was required in the past 7 years has lined the pockets of CVC and Bernie Ecclestone. No wonder he was happy to issue $44m to Gribkowsky and to retain his job and position of power.

I will publish the document here in full later today as I do not have unzip programs at present to do so. This letter and subsequent Pitpass defence has the hallmarks of a truant child forging a parent’s letter to school explaining that the said child’s absence was actually authorised by parental consent.

25 responses to “Wolff wishes to clear the air, Big Foot or The Hulk, Pirelli reveals tyres for 1st 4 races, Ecclestone and the ‘appearing’ evidence”