Ground effect is a term applied to a series of aerodynamic effects used in car design, which has been exploited to create downforce, particularly in racing cars. This has been the successor to the earlier dominant aerodynamic theory of streamlining. IndyCars employ ground effect to some extent, but Formula One and most other racing series worldwide currently use design constraints to heavily limit its effectiveness.

Jim Hall built Chaparral to both these principles. His 1961 car attempted to use the shaped underside method but there were too many other aerodynamic problems with the car for it to work properly. His 1966 cars used a dramatic high wing for their downforce. His Chaparral 2J “sucker car” of 1970 was revolutionary.

It had two fans at the rear of the car driven by a dedicated 2 stroke; it also had “skirts”, which left only a minimal gap between car and ground, to seal the cavity from the atmosphere. Although it did not win a race, some competition had lobbied for its ban, which came into place at the end of that year. Movable aerodynamic devices were banned from most branches of the sport.

Formula 1 was the next setting for ground effect in racing cars. Several Formula One designs came close to the ground effect solution which would eventually be implemented by Lotus. In 1968 and 1969, Tony Rudd and Peter Wright at British Racing Motors (BRM) experimented on track and in the wind tunnel with long aerodynamic section side panniers to clean up the turbulent airflow between the front and rear wheels.

Both left the team shortly after and the idea was not taken further. Robin Herd at March Engineering on a suggestion from Wright, used a similar concept on the 1970 March Formula One car. In both cars the sidepods were too far away from the ground for significant ground effect to be generated, and the idea of sealing the space under the wing section to the ground had not yet been developed.

At about the same time, Shawn Buckley began his work in 1969 at the Univ. of California – Berkeley on undercar aerodynamics sponsored by Colin Chapman founder of F1 Lotus. Buckley had previously designed the first high wing used in an Indy Car,  of the 1966 Indianapolis 500.

By proper shaping of the car’s underside, the air speed there could be increased, lowering the pressure and pulling the car down onto the track. His test vehicles had a Venturi-like channel beneath the cars sealed by flexible side skirts that separated the channel from above-car aerodynamics.

He investigated how flow separation on the undersurface channel could be influenced by boundary layer suction and divergence parameters of the underbody surface. Later, as a mechanical engineering professor at MIT, Buckley worked with Lotus developing the Lotus 78.

On a different tack, Brabham designer Gordon Murray used air dams at the front of his Brabham BT44sin 1974 to exclude air from flowing under the vehicle. Upon discovering that these tended to wear away with the pitching movement of the car, he placed them further back and discovered that a small area of negative pressure was formed under the car, generating a useful amount of downforce – around 150 lbs. McLaren produced similar underbody details for their McLaren M23 design.

In 1977 Rudd and Wright, now at Lotus, developed the Lotus 78 ‘wing car’, based on a concept from Lotus owner and designer Colin Chapman. Its sidepods, bulky constructions between front and rear wheels, were shaped as inverted aerofoils and sealed with flexible “skirts” to the ground. The design of the radiators, embedded into the sidepods, was partly based on that of the de Havilland aircraft.

The team won 5 races that year, and 2 in 1978 while they developed the much improved Lotus 79. The most notable contender in 1978 was the Brabham BT46B Fancar, designed by Gordon Murray. Its fan, spinning on a horizontal, longitudinal axis at the back of the car, took its power from the main gearbox. The car avoided the sporting ban by claims that the fan’s main purpose was for engine cooling as less than 50% of the airflow was used to create a depression under the car. It raced just once, with Niki Lauda winning at the Swedish Grand Prix.

The car’s supreme advantage was proven after the track became oily. While other cars had to slow, Lauda was able to accelerate over the oil due to the tremendous downforce, which rose with engine speed. The car was also observed to visibly squat when the engine was revved at a standstill. Brabham’s owner, Bernie Ecclestone, who had recently become president of the Formula One Constructors’ Association (FOCA), reached an agreement with other teams to withdraw the car after three races. However the FIA decided to ban ‘fan cars’ with almost immediate effect.

The Lotus 79, on the other hand, went on to win six races and the world championship for Mario Andretti and gave team-mate Ronnie Peterson a posthumous second place, demonstrating just how much of an advantage the cars had. In following years other teams copied and improved on the Lotus until cornering speeds became dangerously high, resulting in several severe accidents in 1982; flat undersides became mandatory for 1983. 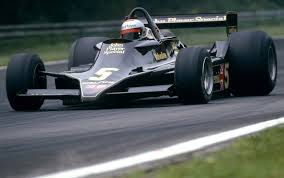 Part of the danger of relying on ground effects to corner at high speeds is the possibility of the sudden removal of this force; if the belly of the car contacts the ground, the flow is constricted too much, resulting in almost total loss of any ground effects. If this occurs in a corner where the driver is relying on this force to stay on the track, its sudden removal can cause the car to abruptly lose most of its traction and skid off the track.

The effect was used in its most effective form in IndyCar designs. Racing series based in Europe and Australia have mainly followed the lead of Formula One and mandated flat undersides for their cars. This heavily constrains the degree to which ground effect can be generated. Nonetheless, as of 2007, Formula One cars still generate a proportion of their overall downforce by this effect: vortices generated at the front of the car are used to seal the gap between the sidepods and the track and a small diffuser is permitted behind the rear wheel centerline to slow down the high speed underbody airflow to free-flow conditions. High nose designs, starting with the Tyrell 019 of 1990, optimize the airflow conditions at the front of the car.

The article is from Wikipedia: TJ13 would like to offer readers to contribute to our community by writing this kind of material. If interested contact thejudge13@hotmail.co.uk

Seeing as so many of you enjoyed Enrique yesterday, here his is again with simple tools of a water flow, a spoon, a flat surface, some paper and a pencil.  Former Williams and Ferrari Design Engineer, Enrique Scalabroni, looks at the aerodynamic phenomenon called ‘ground effect’ and how it generates more down force for the rear of the car.

While such downforce-producing aerodynamic techniques are often referred to with the catch-all term “ground effect”, they are not strictly speaking a result of the same aerodynamic phenomenon as the ground effect which is apparent in aircraft at very low altitudes.

Other interesting material for you to consider. Here’s from beyond the grave Colin Chapman who some call the ‘father of ground effect’.

BBC Horizon’s explanations of ground effect with some historic context.

The headlines from the second practice session at the Circuit de Catalunya were many. Charles Leclerc’s Ferrari was on top but the previously hopelessly balanced Mercedes found new poise with […]

Mercedes F1 answered their detractors in FP2 at the Barcelona GP weekend. Their cars were P2 and P3 behind Ferrari’s Charles LeClerc, but again Hamilton couldn’t match his team mate […]

11 responses to ““Ground Effect”. Its History and Theory explained”