Marko Watch: After the day I had yesterday, my brain was rather scrambled. I find that though I’m one of the most decisive people I’ve met, when in this state, I dither over the most silly of matters for an eternity. Anyway, I finally decided this piece qualified to be categorised as a ‘Marko Watch’ story.

My decision was that it does so on the school playground premise that ‘he started it first, sir’. It appears the good doctor has stirred the hornet’s nest and may reap the whirlwind (mixed metaphors I know). Fernando is reveling in the new found freedom of twitter, and this appears to have given him the confidence to take the offensive to the enemy – politics or not.

For those of you joining the TJ13 blog recently a quick catchup if you need it. Marko attacked Alonso a week or so ago, suggesting he would be better served following the example of head boy Sebastian Vettel who stays focused, never reads or reacts to the media and the direct consequence is that he wins 3 consecutive WDC’s.

Her doctor accused Alonso of being too ‘busy with politics and funny comments’. Well we discovered at that time when delving into Helmut’s past he was indeed once a racer but unfortunately lost an eye in a crash which curtailed his competitive on track ambitions. Well, it may be that the rest of his senses are reeling before the year is out.

Fernando tells Brazilian publication, TotalRace, he was approached by Helmut in the past to join Red Bull on several occasions and each time he refused. In effect he accuses Marko of the living the maxim, ‘Hell hath no fury, like a lover scorned’. Alonso does so by suggesting the reason for Helmut’s personal attacks on him are because, “after hearing ‘no’, it always hurts a little more each time.” Ouch!

Alonso’s blood is up as he addresses the suggestions that Vettel has committed himself to a monasterial vow of solitude and seclusion from the media along with bad American sitcoms. “Some (people) say they don’t read them (Alonso’s comments), don’t hear them and don’t see them, before adding that they are not influenced by them, so clearly they do read them, maybe at night.”

My concern is that a certain well known Germanic leader opened up a second front, and history attributes this decision as that which led to his ultimate downfall. Can the Austrian doctor withstand the frontal assault of Lauda’s growing cavalry posse whilst being outflanked by the maestro; the colourful and flamboyant matador de toros? 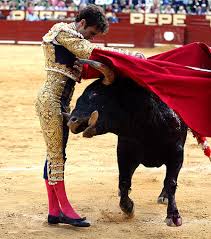