Ecclestone Responds to Il Padrino: Bernie Ecclestone has responded via the BBC to Luca de Montezemolo’s comments about his age and competence. “The one thing he is correct about is my age – there is no doubt about that. I can’t do anything about that. I’m 82 years old and that’s how it is.”

He alludes to the Italian teams bosses apparent rudeness being a result of his recent foray into Italian politics. “I suppose it’s the same sort of thing that’s happened to him recently in politics, where people have been quite rude about him.

Amusingly Ecclestone turns the tables on Luca and suggests his memory is faulty too. “He says he doesn’t remember what he says very often. Luca is not as old as me. I’m sure in his case it is nothing to do with his age because he’s always been the same. At least he’s consistent. God knows what’s going to happen when he’s 82”.

The fatherly advice from Ecclestone continues, “No, Luca is a lovely guy, I’m probably as a big a supporter of him as anybody. I am a big admirer of Luca’s and I’m sorry for all the trouble he’s had with politics recently. He should never have got involved in the first place.”

The old fox again up’s the anti with a flashback to the Prost era when the Ferrari car was described by their driver as a ‘truck’. “I think there was so much pressure from probably the driver,” Ecclestone said. “You must remember he’s [Alonso] been saying nearly every race this year the car is rubbish and it’s a bit difficult for them not to look as if they’re trying to do something to help him.”

Luca had also made a veiled threat when he questioned matters pertaining to the rules and car development last weekend.

“But our patience has run out so someone needs to think about whether they want Formula 1 still to have companies that invest and consider it the most advanced research bench for its own cars – as Ferrari has always done since 1950. We are constructors, not sponsors. Since some people have used the expression ‘It’s a joke’ in recent days, I would like to say that this is the real ‘joke’. Yes, I’m referring to one of Ecclestone’s phrases.”

Bernie’s response was dismissive, “I don’t know what he thinks we could do with an F1 car that could assist his road cars more than it does currently, they take a lot of F1 and put it on their road cars. Their road cars are very technical and they do use a lot. The (F1) rules are there for everyone to use in the best way they can. They’re the same for everyone.”

UPDATE: 15:59 GMT: Bernie is now responding in Italian. He says today to Gazzetta dello Sport, “I don’t feel 82, and as a matter of fact I’m now going to Geneva, then to Istanbul to see if we can get back the Turkish GP and [will then] participate at the World Council,” Ecclestone told Gazzetta dello Sport.

“And I’m not stopping here, I have a thousand more ideas.” Again rebutting the idea he cannot any longer cope, Bernie says, “Do I look in such a bad shape, two weeks after the USA GP that I wanted and somehow created? “I’m 82 and nobody can deny that. But time ago I used to discuss things with an 88-year-old gentleman when Luca was a 40-year-old. His name was Enzo Ferrari”.

It appears Mr. E has something to aspire to as he recalls of Enzo, “Believe me, at that age he could make me shiver because he was terribly tough, incisive and clear-minded.”

Ecclestone also played down his spat with the Ferrari boss, adding: “Anyway, I respect his opinion. It’s no drama. More than once he has attacked me, but in the end we understand each other. I don’t have hard feelings towards him.”

Reading the tea leaves, I suggest Il Padrino scored a direct hit with his comments at the weekend.

Pirelli want 8-10 years: thejudge13 has already reported Hembery saying last week that Pirelli is keen to stay in Formula One well beyond next season. “Maximising the investments in terms of profitability will require a medium term commitment,” Hembery is quoted by journalist Peter Hesseler in the German language Speed Week today.

When asked what his definition of medium term was, Hembery replied “eight to ten years”. This is something new from Pirelli, yet if the teams are signing up for a show that runs until 2020 why should the tyre providers not be afforded the same certainty?

Pirelli stats: Pirelli have just revealed the following – make of it what you will.

• Average life span of a dry compound this season: 180 km

• Average life span of a wet compound this season: 140 km

• Most overtaking manoeuvres in a dry race: 90 at the 2012 Chinese Grand Prix

• Least overtaking manouevres in a dry race: 12 at the Monaco Grand Prix

Pirelli F1 and its people

• Total number of Pirelli people travelling to each race: 52

• Total number of nationalities within the Pirelli F1 team: 10

• Average amount of hours spent by each Pirelli staff member on a plane this year: 192 hrs (or 8 days!)

• Number of Pirelli wristbands given out during the season in the paddock: 4,450

• Total number of hotel nights booked for the Pirelli team: 1,498

Silverstone lose £1m: Silverstone announced today, “While public attendances reached 80,000 and 90,000 on the Friday and Saturday respectively, approximately 10,000 ticket holders did not attend. These fans have now been fully refunded by the circuit at a cost of £1 million.(in numbers of laps as well as in kilometers for practice, qualifying and race combined)

The home of the British GP despite a long running dispute with commercial rights holder Bernie Ecclestone has made radical changes over the past 10 years to facilitate bigger crowds and provide them with a better experience. Road networks have doubles and trebled the flow of traffic to and from the major national arterial routes.

In 2001, Silverstone had about 18,000 fans attend for the Friday FP1 and FP2 sessions, yet this has grown to 80,000 and the arrangements for transport now need to reflect this. This was highlighted dramatically by the extreme weather conditions in 2012 that  caused chaos for transportation getting to and from the circuit on Friday and Saturday.

Silverstone has reviewed the F1 weekend operations and will make a number of changes to ease these problems in the future. The official campsite is to be increase by 70 acres and the non-hard core car parking areas to have improved drainage and access. Most importantly the park and ride has only operated on the Sunday, and this will be extended to both Friday and Saturday now – easing traffic in close proximity to the circuit.

Austrian GP: You all know my feelings on the continual calendar rumblings – anyway. I saw this story yesterday but felt it had no mileage as the basic issue of sanctioning fee’s were not addressed. To be awarded the contract for an F1 weekend, the promoters have to pay a sanctioning fee in the form of a deposit to FOM.

Anyway our favourite Red Bull representative has today spoken on the matter. When asked whether an Austrian GP could be on the cards he responded, “never say never”. The former A1-ring track in Spielberg has been refurbished by Red Bull and now called the Red Bull Ring. It last hosted a Formula One race in 2003.

Vettel made reference to a potential ‘home’ race for Red Bull in Austria yesterday and when asked about his comments, Helmut Marko said: “At the moment, the world economy is quite simply booming in Asia and South America. “There are (Formula 1) sanctioning fees in the order of $20 to $30 million to pay, so one simply has to ask the question of where does this come from.

Come on Helmut, you know who can afford it –  don’t you? “But with (Dietrich) Mateschitz, you can never say never. Let’s see how it develops,” added Marko. “There are places like Korea, where the track is not great, there is only one hotel and it’s difficult to travel in and out. Places like that are not going to stay,” predicted Marko.

But they have a contract Helmut and as long as they want to pour $40m plus down the drain they are allowed to do so. My recollections of the A1 ring were not particularly great – how about you thejudge13 readers?

Adam Parr: Joined twitter 6 days ago @adam_s_parr – obviously marketing his book, but is also asking whether there should be an F1 Fans association. Guess Bernie won’t allow me to run that one D)

Horner RB9 running late: In an interview with Servus TV, Christian Horner admits that due to the need to develop the RB8 to the last race of the season, it may be the case that Adrian Newey has been delayed in getting to grips with the fundamentals for the RB9.

With a mere 9 weeks until the cars appear on track in Jerez on February 5th 2013, Milton Keynes will need to pull out all the stops before the first winter test.

1997
Nigel Mansell was stopped by police doing 92mph on a 70mph road in Somerset, weeks after he had taken delivery of his new 170mph £233,000 Bentley. His lawyer subsequently told the court that Mansell was “a highly experienced driver who has an unblemished record as far as accidents are concerned. He is meticulous about road safety,” adding that the car was “well-insulated against noise and crept up over 70mph without him knowing.” The magistrates were unimpressed, banning Mansell for six months and fining him £400.

Michael Schumacher presented the Pope with the steering wheel from one of his championship-winning cars. The wheel bore the inscription: “The Formula 1 World Champion’s steering wheel to His Holiness Benedict XVI, Christianity’s driver.” Perhaps Schumacher was looking for some divine intervention for an eighth title? His Holiness seemed more impressed with the model Ferrari – shame it wasn’t remote control eh? 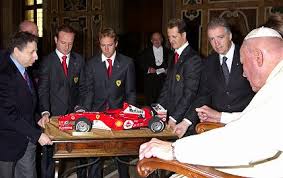 Last weekend’s Formula 1 British Grand Prix was like many other weekends since Daniel Ricciardo joined McLaren, the Australian was definitively the second driver within the team having qualified a […]

As the 2022 Formula One season evolves the heroes and the villains are beginning to evolve and Charles LeClerc.s attitude is under the microscope. The Ferrari driver failed to out […]