“The rain is falling all around,
It falls on field and tree,
It rains on the umbrellas here,
And on the ships at sea.”

Monaco nestled quietly under a blanket of early morning haze while the Formula One cars sat still and silent in their respective garages. The only sound was that of rain splashing gently onto roofs, windows and, most ominously, roads. Water trickled down the dark tarmac, creating puddles and flooding gutters. Raindrops drilled dimples into the slate like water of the harbour. Somber clouds filled the sky overhead, giving minimal likelihood of the soon emergence of sunshine. 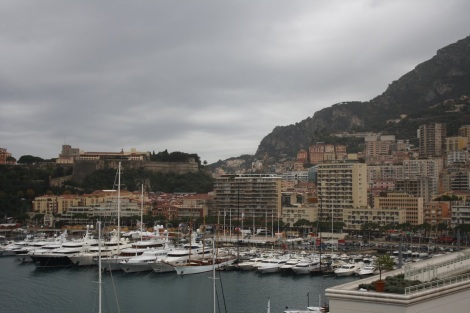 Team managers and engineers gazed out to sea, trying their best to ascertain the direction and severity of incoming inclement weather. There were as yet no satellites or radar to give instantaneous predictions as to the estimated probability of precipitation. All anyone could do was guess and hope for the best. The rain had already created chaos during qualifying the day before with neither McLaren being able to improve on their time from Thursday. Niki Lauda and John Watson had been five seconds slower than the pole setter Alain Prost, and only the top twenty were allowed to start on race day. It would be the only occurrence that both McLarens would fail to qualify.

Before the final practice session on Sunday morning the rain stopped but no-one knew if and when it would start again. Keke Rosberg had not been well, battling a virus the whole weekend. He had been going to bed early and resting between practices. Everyone doubted that he would have the physical or mental stamina required to complete 76 laps of the tight and twisty street circuit.

At 35 years of age Rosberg was the current reigning world champion…however there had been much discussion of his deserving such an honour. No one driver had dominated during 1982. There had been eleven different winners and no one had won more than two races. Rosberg had ended up on the top of the table, but with only one win his “right” to a world driver’s championship had been hotly debated by both the fans and the press.

At Scuderia Ferrari Gilles Villeneuve had been tragically killed during qualifying for the fourth race of the season at Zolder and Didier Pironi had been seriously injured at Germany. Ferrari won the constructors championship, and Pironi held on to second in the Driver’s Championship despite not contesting the last five races. Rosberg’s teammate at Williams, Carlos Reutemann, had retired from racing, in part due to the Falkland’s war causing difficulties with an Argentinian driver in a British team. He was replaced by Derek Daly who though reliable was not noteworthy. Rene Arnoux and Alain Prost were in the Renault that was still struggling for reliability with its soon to be essential turbo engine. They had two wins each, but multiple DNF’s. McLaren drivers John Watson and Niki Lauda  had two wins each, but more retirements and less finishes in the points kept them out of the running for the championship.

1983 was continuing as 1982 had finished – four different winners driving for four different constructors for the first four races. All the winners had been powered by turbo engines apart from John Watson who had won at the Long Beach street circuit in his McLaren-Ford. Cosworth DFV’s were on the way out, their fifteen year reign finally coming to an end with the abolition of ground effects, and turbo engines were now becoming essential if you were to have any hope of challenging for the win. It was only the year before that turbo engines were starting to make their presence felt after several rocky, unreliable years during which Renault persisted with their development of the new technology. Ferrari and Alfa Romeo had joined them in 1982 and now and for the 1983 season their use was widespread. Everyone of note either already had one or was planning how to get one. McLaren had seen the writing on the wall and were in the process of finalising a contract for a turbo engine from Porsche.

Keke Rosberg was 5th on the grid, and was the highest placed normally aspirated engine with a Ford-Cosworth DFV in his Williams car. Both he and his teammate Jacques Laffite decided to take a gamble with the conditions and start the race with slicks. The majority of the field and all the front runners were using wet tyres, despite the rain clearing and blue sky now becoming visible in the distance, far out at sea. As the lights changed the more controlled power of Rosberg’s Cosworth engine gave better grip to his slick tyres and he zipped up the middle of the cars in front of him who were struggling in the slippery conditions with the power delivery from their turbo engines and their increased torque. He was in second place going through the first corner and by the end of the first lap he had passed Prost for the lead. The only time he was seen again by the other competitors was when he was lapping them. 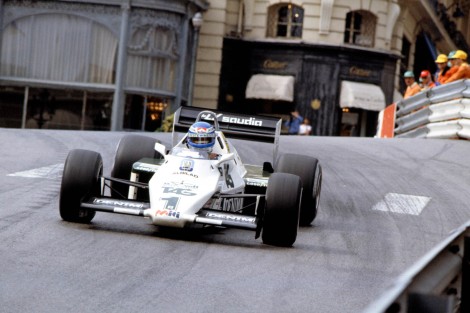 It wasn’t long before the rapidly drying track began playing havoc with the wet tyres and soon all the front runners were pitting for slicks which allowed Rosberg to build up an unbeatable lead. His only threat was his teammate Laffite who for a time was catching up to him, after getting past Eddie Cheever who was holding up the rest of the field. After seven laps Rosberg was 28 seconds ahead of Lafitte and by the end of lap ten he was starting to lap the backmarkers.

Prost and Cheever in their Renaults were battling it out for 6th and 7th place when Rosberg came up behind them to lap them on Lap 24. It was after this that Rosberg started losing time to Lafitte who closed more than ten seconds of the gap between them. Rosberg’s head was starting to bob around and the commentators discussed whether, with his recent illness, he would be able to finish the race. There also concern about if the slowing of his lap time was due to a mechanical issue with his car. However, the gap was then maintained at 19 seconds and by lap 53 he was again gaining time over Lafitte. Suddenly Laffite slowed, out of the race with a gearbox failure.

Rosberg went on to take the chequered flag for only the second win of his career. Nelson Piquet was second, over eighteen seconds behind him, and Alain Prost crossed the line for third. Rosberg had lapped every car except the first four.

Rosberg had been given little opportunity to show his talent and driving skills prior to 1982. He had spent his first seven years in Formula One driving cars that the best they could often hope for was to finish the race. The only glimpse of what he was capable of had been a podium in Argentina driving for Skol Fittipaldi during 1980 with an ageing Emerson Fittipaldi as his teammate.

In 1982 his luck changed.  Alan Jones decided to retire and return home to Australia. Frank Williams needed a replacement, but his first choice of Mario Andretti wasn’t available as he was driving CARTs in the United States. Rosberg was hired as the number two driver to Carlos Reutemann, but after only two races Reutemann resigned and Rosberg was left as the sole remaining driver. Eventually Derek Daly joined the team, giving a solid but not spectacular performance. The best he could manage was several fifth place finishes. Rosberg went on to win the World Championship, scoring his maiden victory at the Swiss Grand Prix, along with a solid string of podiums and points finishes.

In this race Rosberg showed his superior skill in wet, marginal conditions, sliding he rear wheels masterfully around corners, the tail of the car swinging around before he planted his foot on the accelerator, going as fast as possible for the conditions. His car was far from the most powerful, but he exploited everything possible from it. It was after this race that Rosberg’s critics finally began to acknowledge that maybe his World Championship from the year before had been at least partially deserved. He had decimated the more powerful Ferraris and Renaults and shown his supreme car handling abilities. Maybe he did deserve to be a World Champion after all.

OK, perhaps the title not strictly true in the context of Valtteri Bottas’ current Mercedes contract to drive, but Bottas certainly crashed out of today’s Formula 1 Grand Prix at […]