“I don’t believe in learning from other people’s pictures. I think you should learn from your own interior vision of things and discover, as I say, innocently, as though there had never been anybody.”

The target was two hundred and seventy – the amount of horsepower Soichiro Honda instructed his engineers to pursue for their inaugural entry into the highly competitive environment of Formula One. His appointed project supervisor demonstrated his ignorance when he asked, “What is Formula One?” He was informed that everyone is a beginner at first – you just have to work it out as you go. Honda wanted a car capable of winning and to achieve that maximum power would be essential. This objective gave the prototype its name – the Honda RA270.

The racing bug had infected Soichiro Honda at an early age. He was a mere 17 when he won his first race as riding engineer in a car that he and his boss Yuzo Sakakibara had created by placing a Jenny biplane engine into an American Mitchell chassis. 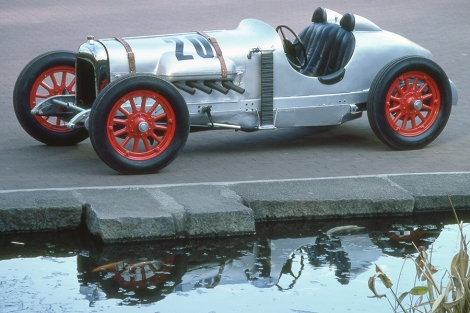 Twelve years later he supercharged a Ford and entered it in the inaugural race at Japan’s first racetrack – the Tamagawa Speedway. His car performed exceptionally well, setting a Japanese speed record that would take 20 years to be bettered. Unfortunately near the end of the 100 lap race his car came into contact with a slower car that was emerging from the pits. His car proceeded to fly through the air, flipping three times. Both he and his riding engineer brother were thrown out of the car. After a lengthy hospital stay Honda’s family forbade him to race again. Despite, or maybe because of this, racing was still in his blood but the onset of World War 2 brought all local racing activity to a sudden and complete halt. Soichiro, due to his colour blindness making him ineligible for military action, spent the war years manufacturing piston rings. After the devastation of his factory by allied bombing he sold his remaining stock to Toyota and sat back to mediate on his next possible adventure.

Post war vehicles were in short supply and the most common form of transport was the bicycle. He collected some army radio generators that were being sold off cheap and attached them to bicycles to create a powered bike. Using a hot water bottle as the fuel tank his wife demonstrated the prototype version to good effect while she cycled around their home town doing the shopping.

When his supply of Mikuni engines ran out he turned his hand to manufacturing his own power-train. His first motorcycle was produced in 1949 and got the nickname “The Dream” and the dream of having a competitive racing machine was soon to follow. The Isle of Man TT was the pinnacle of motorcycle racing and with the Honda RC161 he finally achieved his goal – a machine capable of a world-class level of performance. After a year spent sorting out the gremlins, he had the good luck to come across a 21 year old Mike Hailwood in search of a ride. He won their first TT race at the Isle of Man in 1961 – actually Honda took the top 5 places in both the 125 and 250 cc categories that year – whitewashing the opposition. The time was right to apply what they had learned to car racing. 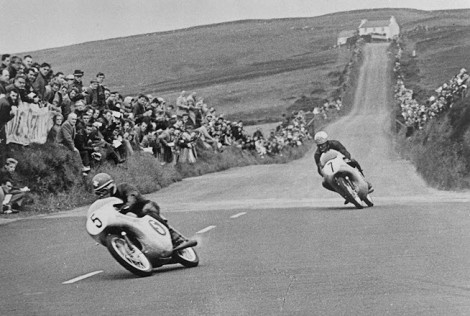 It was 1962 and the previous year Formula One had downsized to 1.5 litre engines. Soichiro Honda was interested…very interested. It was what they were already good at: small, speedy, high-revving engines. Even though they had yet to produce a road car they announced their intention to enter Formula One.

His first car, the S500, was driven out of the showroom in October 1963. You would have expected it to be sensible and functional as this would be the best way to make a profit in a country where the majority of the households had little disposable income. But Honda was a dreamer…not a practical man. Instead it was a sporty, open top two-seater featuring an aluminum engine, twin cams, and hemispherical combustion chambers – one of the most advanced engines on the planet. Honda motorcycles could rev to 14,000 revs and the roar they produced became known as the “Honda sound”. The Honda S500 belied its roots in motorcycle engines, its ear splitting 10,000 rpm red-line producing the same iconic cacophony of sound. 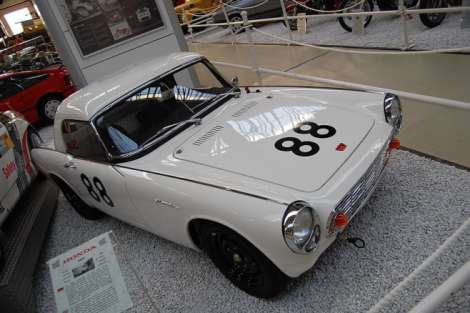 Honda had a vision of his cars painted in the patriotic colours of scarlet red and ivory white which forced him into battle with the typically inflexible and immovable Japanese bureaucracy as these were the customary colour of rescue vehicles. It was an argument he ended up winning and red, white and Honda are still intrinsically linked in our historical memory…even when Honda later re-emerged as the power-train behind the red and white Marlborough McLaren’s in the 1980’s. At the 1965 Tokyo Motor Show Honda was able to put in pride of place the winner of the 1964 Nurburgring 500 km race – Denny Hulme taking the S600 with its up-sized engine to class victory against the might of the Europeans.

Another necessity was a convenient test track. Carting all their paraphernalia overseas to test was too slow and cumbersome, especially with deadlines at hand. Hans Hugenholtz received a short and to the point telegram. “Please come to Tokyo, Soichiro Honda.” Hugenholtz, the director of the Zandvoort circuit, was the Tilke of the 1960’s …except with more talent and creativity. He hadn’t designed Zandvoort – Sammy Davis had done that based on the sand dunes and roads already in situ. But the twisty and sandy track was Hugenholtz’s inspiration. The end result was Suzuka – still a favourite of racers and fans alike more than fifty years later. In 1963 the first Japanese Grand Prix was held there as a non-championship event. Lotus salesman and part-time racer Peter Warr driving a Lotus 23B took the chequered flag. He would later be better known for taking over the reins of boss at Lotus after Colin Chapman’s early death.

Their first goal in designing their Formula One car was the engine…after all it was what they already knew. Their cutting edge power-train was going to be a V12, mounted transversely. A V12? Even Enzo Ferrari had given up on them years ago and was now making V6’s and V8’s like the rest of the field. The V12 had the advantage of small and light moving parts – very light as it had 48 valves, all of them tiny. Because of that it could rev higher and get more power. And it was power that Honda wanted most of all – enough power to be competitive. He wasn’t just entering F1 for the thrill. He wanted to win.

But they weren’t going to get far without a chassis. Colin Chapman considered designing a Lotus around the Honda V12 for Jim Clark to drive…now that sounds like a marriage made in heaven. Unfortunately it never came to fruition. Jack Brabham had won the 1960 World Championship in a Cooper so Honda bought a Cooper Climax to examine, but their exquisite engine wouldn’t fit in it. You might have thought they would have copied the Cooper, adjusting the design to suit their engine. But Honda wasn’t into copying. He wanted to make something different, something even better! The Cooper had a bent tube frame, as did the majority of entrants. Instead Honda went for an aluminum monocoque, pioneered by Chapman when he designed the Lotus 25 two years before.

Their first prototype, the RA270, was ready to be tested in February 1964. Japan was a long way from Europe so they based themselves at the wild and windy circuit at Zandvoort. Modifications were made and the RA271 was ready for the German Grand Prix with their single entrant piloted by Ronnie Bucknum. Multiple teething problems meant they were fortunate to be given an extra practice session at the 22km Nurburgring which enabled them to complete the minimum five laps deemed necessary for qualifying. They started the race from the last spot on the grid, more than 20 seconds slower than Giancarlo Baghetti’s BRM who had qualified in 21st. Despite spinning on Lap 11 and unable to finish they were classified in 13th. It would be their best finish as mechanical breakdowns continued to plague them for the remainder of the season.

In 1965 were ready to enter two cars with their upgraded RA272 and the newly hired Richie Ginther racing alongside Bucknum. Ginther was a good racer, but even more importantly for Honda, he was exceptional at car development. And the car needed developing. Even though they had managed to shave 100 pounds off the weight it was still over 100 pounds heavier than any other competitive car in the field and would need every one of its 230 horse power (they never managed Honda’s goal of 270) in order to try to stay in the chase.

The car wasn’t ready for first race in South Africa, but they managed to get to Monaco. Both cars started the race from the back of the grid and neither finished the race. The following race at Spa Ginther dragged the car to 6th place and obtained the fledgling team’s inaugural points. Ginther also managed another 6th place at their “home” race at Zandvoort.  The car actually led this race for a couple of laps, but then spun…twice – probably because its handling problems were amplified when it was carrying a full fuel load. The car had speed, Ginther often qualifying well up the pointy end of the grid, but then struggled with race pace and reliability.

The last race of the season, and the swan song for the 1.5 litre formula was held at the high altitude Mexican track. Once again Ginther was third on the grid, but this time the high revving V12 was reveling in the low oxygen environment and he accelerated off the starting line like a rabbit being pursued by foxes. He had the lead by the first corner, leaving not only Dan Gurney but pole sitter Jim Clark in his wake, and never lost it for the entire race. Ginther took the chequered flag for his first and only win, and first victory for Honda and a Japanese manufacturer. It was also the first win for Goodyear tyres. He was less than three seconds in front of fellow American Dan Gurney in a Brabham-Climax. With Ronnie Bucknum getting a 5th place it was their first double points finish – which wouldn’t happen again until 2006!

It was the only race of the 1965 season not won by a British driver and a British-powered car. No longer would the Honda F1 team be talked about as “those motorcycle people”. But 1.5 litre engines were now out and 3 litres were back. Would Honda having any hope of being able to keep up with the Brits who had dominated the 1.5 litre formula or Ferrari who had now returned to their historical favourite – a V12 engine?

Lando Norris’ crazy ambitions with McLaren – Lando Norris has set his sights on the McLaren F1 team despite the presence of Daniel Ricciardo. The 21-year-old driver is dreaming of […]

Sebastian Vettel says he will not turn his back on Formula One once he retires. The German driver has extended his contract with the Aston Martin F1 team to 2022. […]