Brought to you by TheJudge13 chronicler Carlo Carluccio 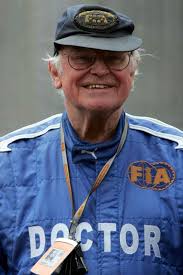 Bernie Ecclestone is losing his power within the incestuous world of Formula One; that’s a given. At 83 years of age, he should be assigned a bed with water-proof layers in a secure institution.

There is no doubt that his contributions to Formula One have changed a cottage industry into a global business which attracts governments to the playground.

Yet for all his greedy, wealth generating ideas or the subterfuge involved in his many business dealings, every Formula One driver has to give thanks to the Gospel according to Bernie.

Jackie Stewart began a campaign to make a safer Formula One but in the late sixties and early seventies he was often rebuked by circuit owners, promoters, journalists and – perhaps most shockingly – his fellow drivers.

In 1978, Ecclestone visited Professor Watkins and invited him to become F1’s official medic. He accepted and would revolutionise medical facilities throughout the world over the course of the next thirty years.

He had been a volunteer to the Watkins Glen medical team during the sixties when he was working in neighbouring Syracuse. By 1970 he had returned to London and was requested by the RAC MSA to provide similar care at the British Grand Prix. His suggestions for improved medical facilities fell on deaf ears.

His first official appointment was at the 1978 Swedish GP but it was the Italian race that year that changed the course of safety within the sport. Ronnie Peterson had crashed heavily after the start, he had fractured his legs in twenty seven places and had needed the assistance of Regazzoni, Hunt and Depailler to free him from the wreckage.

Watkins arrived at the scene but was barred by the human wall of police surrounding the injured driver. It would take 18 minutes for the ambulance to arrive to take Peterson to hospital. Brambilla had also been injured during the accident, being knocked unconscious when a wheel hit his head.

By the time the circus arrived in the US for the following event, Ecclestone had provided the Prof with better safety equipment, an anaesthetist, a medical car and a medical helicopter. The decision was made that the medical car would follow the pack round for the first lap thereby being available immediately in the aftermath of an accident.

A new ruling was introduced that no F1 test could commence without a full medical and emergency team being available which also included the helicopter used for emergency evacuation. These safety requirements would filter down to the grass roots of motor-sport and is still in evidence today.

Watkins would attend the scenes of Villeneuve and Paletti’s fatal accidents, would look after the recovery of Frank Williams and in early 1987 had to threaten his resignation if he was over-ruled by the circuit officials in Imola to allow Piquet to race after suffering concussion during a heavy crash at Tamburello.

His victory there set a precedent and his authority was never questioned again.

Sid Watkins worked tirelessly to improve safety; never for personal gain but because he cared about the sport. He passed away in 2012 and perhaps the most fitting epitaph was given by the man who started the whole process.

Jackie Stewart: “Unfortunately I have been to far too many memorial services. But I would have been to many more were it not for the Prof”