TJ13 updates: Huge thanks to theUsher. He has driven twitter readers from 50-80 per day to nearly 300 a day, whilst again battling with the twitter Overlords who sanctioned him again yesterday.

If you are in twitterlandinium, follow the Usher, he tweets links to all interesting pics and a range of F1 bits and pieces. Have a brief chat with him because whilst he can be dour it helps him avoid the Federation secret police who are looking for twits who simply post links.

If you see a link starting with ‘Wp’ it is to TJ13 site and will be articles you’ve probably read. If the link begins ‘goo’, then it will be one of the eclectic and fascinating F1 minutia he digs up – and takes a few seconds to view and move on.

Purple F1 cars: Following the TJ13 RB9 livery reveal, I found this. Was this the last F1 car to be coloured purple and who were the team, the driver and the year?

Lotus Launch: Well the first reveal of a full car happened last evening. The team had planned to use a marquee temporary structure, fully designed with lights and sound for the event, but had to relocate back to the factory due to high winds at the last minute.

This may explain why many viewers felt the event was a little underwhelming. One twitter follower commented “That was the most low key F1 car launch I’ve seen for quite some time”.

Another found the whole thing quite repulsive, “This is so cringeworthy, it’s horrible” – @8BitF1. A AMUSING TWEETER I often use for source material tweeted simply, “#DeJaVue”

TJ13 tries to bring the various aspects of F1 to all, and some like the politics, others the insider intrigue and some like technical details, so here’s some stuff for the techie crew.

The car appears to be very much a 2012 version with minor tweaks. The stepped nose is still there as the FIA rules do not enforce this be changed, only offer an option. This seems pointless as the option was there in 2012 as McLaren demonstrated.

The penalty of adding the aesthetic cover to smooth this bump out is weight. This may only be a matter of grams, but when cars are running short of fuel in qualifying for the sake of 750gms – clearly the engineers believe weight penalties are important.

James Allison explains, “We have not done it yet  because the cosmetic panel would weigh a few grams and with a Formula 1 car putting a few grams on that you don’t need to is anathema.

“But if we find a cosmetic panel that looks nice but much more importantly and crucially gains us a bit of downforce we’ll pop it on quick as you like.”

From other pictures I posted yesterday, the team have retained a push rod suspension system – unlike Ferrari – and the main difference are the side pods which look to be a copy of the RB8 with a coanda style exhaust system.

There a none of the aero turning vanes under the nose are there, and the front wing is actually the one used toward the end of last season. Clearly the team are keeping their aero ideas close to their chest until the first day in Jerez.

We saw a huge amount of development last year with front wing add-on extra’s. First one additional flap above the front wing, then double and triple-decker versions appeared as the season progressed.

There were also vertical flaps near the edge other front wing that directs the airflow around the wheels which were introduced and each race these had different shapes and at different angles as the teams tried to optimise the interference of air traveling around the wheels.

I predict this will continue in 2013, and there will be some ridiculous evolutions of these aero parts that will occur as the engineers look for another 0.01 of a second. They will make the cars look increasingly ugly and clearly if the regulations body ever gets established, all this will be controlled or banned in 2014. 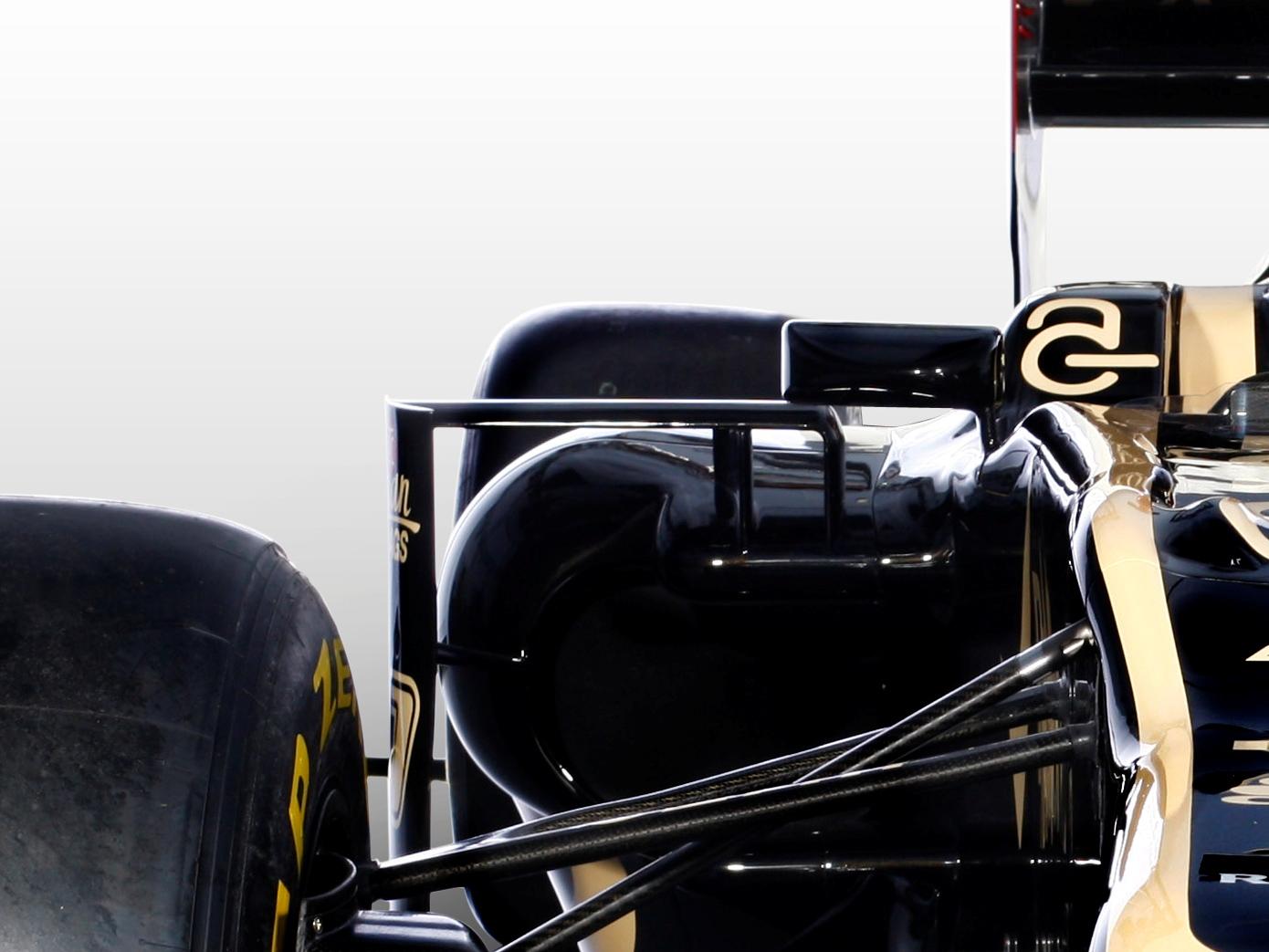 In this picture we can see something new. These struts or vanes are designed to direct the airflow over the side pods and down towards the exhaust region.

Though the magic airflow into the back of the car, creating significant amounts for rear end down force,  has been vastly reduced by recent regulations – the teams clearly still believe there are gains to be found in this area of aerodynamics.

We heard a lot about DRS, then DDRS – the Mercedes system that when the flap was open revealed little holes which directed the airflow down tubes to other areas of the car where there was some aero gain.

Well this system is now banned, and we may hear quite a bit this season on the latest iteration of this concept – passive DRS.  For F1 historians this concept finds its roots in one of the F1 great engineers designs, Gordan Murray – but that’s for another day.

Holes revealed by the DRS flap designed to channel air are now banned. However, teams have learned channel fast flowing air can make significant changes to certain areas of high and low pressure around the car.

Passive DRS is simply – holes in the body work that can capture fast flowing air. It will then be transferred down tubing and delivered to a part of the car where changing the natural air pressure will create or release additional downforce.

The car likes extra down force in corners to glue it to the road, and hates this on the fast straights – because it slows the vehicle down. Passive DRS was deployed by both Lotus and Mercedes in 2012, though not to great effect it must be said.

A couple of final comments. Kimi’s name appears behind the air intake above the driver’s head. This is prime time sponsor spot – clearly the final list of partners is not yet agreed.

As predicted by TJ13 yesterday, Davide Valsecchi has been announced as the Lotus team reserve driver – we have an Italian driver back in play.

The Silver Arrows: Lewis gets to see some proper F1 cars