It was May 22, 1955, and the European and Monaco Grand Prix was reaching its climax. You can almost see Alberto Ascari straining every sinew of his body and of his Lancia D50, to catch race-leader Stirling Moss’s Mercedes Benz W196. It as the 77th lap and he was catching Moss at an astonishing rate of nearly 3 seconds per circuit. A quick calculation showed it would be a one lap duel with the cars adjacent on the track. 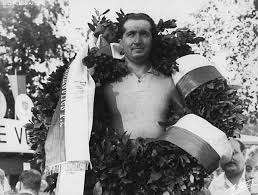 1954 had been an immensely frustrating year for Ascari – WDC of ’52 and ’53. He had walked out on Ferrari at the end of 1953 and on 1 January 1954 had signed for the ambitious Lancia company, who had designed and built an innovative new Grand Prix car, the first in their history. Progress however was slow, and the car’s debut was delayed again and again. Meanwhile consternation reigned in Northern Italy when Mercedes Benz announced that revolutionary new streamlined “Silver Arrows” were to be ready to race in the French GP in July.

Accordingly Alberto together with friend and mentor Luigi Villoresi were released by Lancia to drive 250F Maseratis to meet this threat to Italian supremacy. They shouldn’t have bothered. Fangio and Kling in the Mercedes W196s blew all the other competitors off the track; only six out of the twenty-one starters survived. Along with many others Alberto blew his engine on lap 2 trying to keep up with the two Mercedes.

After some fairly chaotically unsuccessful races for Maserati, Ascari was generously loaned a Ferrari for the Italian GP. Alberto managed to reach the front row of the grid and by lap 6 was in the lead. The race settled down to become a duel between Ascari and Moss’s private Maserati, but on lap 49, Alberto retired with an overstrained engine. Eventually what the Italians had most feared happened, Fangio won on the German Mercedes, but only after Moss’s oil tank split.

Clearly something had to be done, and so two Lancias, maroon-red paint barely dry, were rushed out to make their debut at the final race of 1954, the Spanish GP, held on October 24 round the Pedralbes circuit. Alberto started impressively and by lap 8 had built up a big lead. On lap 9 however, a moan of dismay went up as he stopped with clutch problems. After one more slow lap, Ascari retired. Villoresi had already retired on lap 4. Although Hawthorn’s Ferrari won the race and Fangio won the WDC of 1954, thanks to the Mercedes Benz W196.

Although all 3 Lancias retired in the Argentinean GP of 16 January 1955, the D50s won two minor F1 races and with the powerful team of Italians, Ascari, Gigi Villoresi, and young Eugenio Castellotti, Lancia was well placed to take on and even beat the all-conquering Germans. 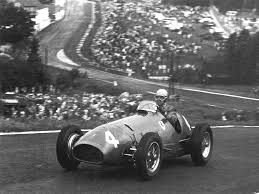 And so back to Monaco…… On the 81st lap Moss swung his smoking Mercedes Benz into the pit. The pistons had packed up for the day. As Fangio had already retired with a broken transmission on lap 50, the German challenge was finished leaving the stage clear for a debut Lancia GP victory.

As Ascari drove up towards the Casino on that fateful 81st lap the loudspeakers were telling the crowds what he could not know; that Moss was out of his car and the mechanics were gazing hopelessly at the ruined engine. As he took the Casino corner and wound the Lancia round the sinuous bends by the station Alberto noticed that the spectators were waving and signaling to him. He had no way of knowing that they were trying to tell him that when he reached the pits he would be the leader.

His deadly concentration on the task of taking the Lancia round the city circuit a little faster than seemed possible was broken. He sensed that something was wrong as he swung round the station bends and turned on to the Corniche road. He flashed into the tunnel and out into the brilliant sunshine to be confronted with the same gesticulations and excitement. It distracted his attention for a vital second as he covered the downhill approach to the chicane and the corner became impossible.

Ascari chose the only way out and took the Lancia clean through the barriers into the sea. Concealed among the straw bales was an iron bollard the size of a small barrel. The car missed it by about 12 inches. Steam from the hot engine mingled with the dust and fragments of straw floating in the air. For an agonizing three seconds everyone’s breath stopped. Then the pale blue helmet appeared bobbing on the surface. Ascari was hauled into a boat before even the frogmen could reach him.

Trintignant won the race in a Ferrari. He had driven a fast but steady race and had seen the successive elimination of all the eight drivers who had been in front of him at the end of the tenth lap. Meanwhile Alberto was lying in a hospital bed suffering from nothing worse than a broken nose, and, not surprisingly, shock. It was a miraculous deliverance.

Alberto was an extremely friendly and cheerful character, however despite his incredible skills he was extremely superstitious when it came to racing and truly believed that it was his superstitions that were keeping him safe through his dangerous moments. Amongst other things, Ascari stayed miles away from black cats, had a long list of unlucky numbers he stayed away from and never ever, under any circumstances, allowed anyone else to carry his briefcase that contained his racing gear – his lucky blue helmet & his teeshirt, goggles and gloves.

Four days after Monaco, Ascari was on his feet again in Monza, watching the practice for the Supercortemaggiore race. Most strangely and out of the blue, Ascari announced that he wanted to race a few laps. Those close to him believe this was to prove to himself he had not suffered any permanent psychological damage from his trip into the Monte Carlo harbour. 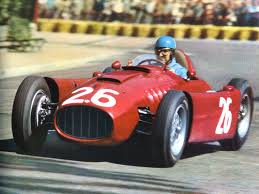 It was particularly strange because Ascari, did not have his lucky racing gear, yet he took to the tracks in the Ferrari in a jacket and tie, wearing Castellotti’s white helmet. As he emerged from a fast curve on the third lap the car unaccountably skidded, turned on its nose and somersaulted twice. Thrown out on the track, Ascari suffered multiple injuries and died a few minutes later.

Alberto Ascari was born in Milan on July 13, 1918. His father Antonio was the greatest Italian driver of his day and frequently used to take his son with him to races in which he competed. A fortnight before Alberto’s seventh birthday, Antonio Ascari was killed while leading the French Grand Prix at Montlehry. From then on it was Alberto’s passion to become a racing driver like his father. So absorbed was he with this ambition that he twice ran away from school and at the first possible moment bought himself a motor-bike. His first motor race was the 1940 Mille Miglia, the car he drove was a Ferrari. In 1940 he married a Milan girl and they had two children. The boy was named Antonio in memory of his grandfather and the girl was called Patrizia. Ascari was devoted to his family.

After WWII Alberto resumed racing in 1947. He bought a 4CLT Maserati from the new owners, the Orsi family. He managed to scrape together 3 million lire, and his good friend Gigi Villoresi helped with some of the other 2 million. Ascari and Villoresi raced successfully on the tracks of Northern Italy, and the Milanese crowd bestowed the nickname “Ciccio” meaning “Tubby” on Alberto. 1948 proved another successful year for the two friends in improved San Remo Maseratis. Ascari also had one race in a 158 Alfa, finishing 3rd in the French GP at Reims behind team mates Wimille and Sanesi. 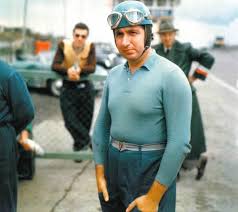 Enzo Ferrari, who had been a great friend and team mate of Alberto’s father, had been taking a keen interest in Alberto’s successes, and he signed both Ascari and Villoresi in 1949. That year Ascari had five victories plus another win at Buenos Aires in the Peron GP.

In 1950 he had nine Ferrari victories and in 1951 six, despite Ferrari playing second fiddle to the aging 158/159 Alfa Romeos, but 1952 was his most successful season with 12 wins. He missed the first race of 1952, the Swiss GP, as he was away qualifying at Indianapolis with the big 4.5 litre Ferrari, which suffered a wheel collapse in the 500, but for the other races he had a comparatively easy ride, Fangio of the rival Maserati team being out of racing for most of the season after a crash in the Monza GP in June. He won the World Championship at a canter, then repeated the feat in 1953, despite the tougher opposition from the Maseratis of Fangio and Gonzales.

Ascari was most relaxed when out in front of a race, and was unlike most drivers in that he appeared not to give of his best when further back. As Enzo Ferrari later recalled, “When leading, he could not easily be overtaken – indeed it was virtually impossible to overtake him.”

He was not a relaxed driver. With his mouth set and his eyes concentrated he seemed to whip his car along and his sensitive hands constantly manipulated the steering wheel. When he was really in a hurry he took his bends in a series of dicey jerks rather than in one controlled slide. To have Ascari on your tail was a truly unnerving experience. The knowledge that he would have to find an opportunity to pass seemed to worry him.

Ascari’s death was regarded as a national loss. Telegrams of sympathy were received from the heads of three foreign states. From the front columns of the Church of San Carlo al Corso hung black drapes and a huge inscription: “On the Last Finish Line, meet, O lord, the soul of Alberto Ascari.”

Sometimes in life there appear cruel coincidences, and Alberto’s death had stunning similarities to that of his father Antonio. Both men (36 years old) died on the 26th day of the month; Alberto on May 26th, 1955 while his father perished on June 26th, 1925. Both racers had won 13 championship races when they perished and both were coming off of a major accident that had occurred four days earlier. Both drivers had had accidents on fast, but easy left-hand corners and both men were survived by a wife and two children.

Alberto’s funeral procession included 15 carriages that carried wreaths and flowers while his hearse, drawn by black horses, carried his famed light blue helmet on top of his black coffin. The procession passed through a silent Milan and almost one million mourners as it to Ascari to his final resting place, next to his father.

Such was the silence in the city it was said that unanswered telephones in houses could be heard across the entire city. Three days after the funeral, Lancia officially suspended all racing activity, and in July they handed six Lancia D50 cars, engines, blueprints and spares over to Ferrari.

In Spain, the talk of the paddock has all been about whether the Mercedes upgrades tested earlier this week in Paul Ricard would put them back in the hunt for […]

Lewis Hamilton and George Russell say the Mercedes AMG F1 team in Spain has taken a decisive step forward ahead of the race, and allude to the fact that they’re […]