A true great who gave such a service to the sport, and someone that will always be remembered, not least for his blistering speed, but also his personality off the track. Of course, it is none other than Ayrton Senna, now 19 years on.

Ayrton Senna da Silva was born into a wealthy family in São Paulo on 21st March 1960. He was the middle child of three, had a highly athletic upbringing and excelled in gymnastics. He first reportedly took an interest in motor racing at the tender age of 4. At the age of 7 he learned how to drive; taking a Jeep around the family farm.

His first kart was a 1 HP go-kart which was built by his father using an old lawnmower engine. He entered his first competition at 13, and it is from here his racing spirit was born. Senna won the South American Kart Championship in 1977, and competed in the Karting World Championship from 1978-82. During which time he finished runner-up in 1979 and 1980.

1981 was a pivotal year in the life of Senna, as he first moved to England at this time. He won the RAC and Townsend-Thoreson Formula Ford 1600 Championships, in his first single-seater. Initially, Senna was pressured to take up a role in the family business, as he returned to Brazil. However, the offer of £10,000 to race for the Formula Ford 2000 team made him return to England. How different life could have been for Senna.

He went on to win the British and European Formula Ford 2000 Championships. The following year, 1983, Senna drove in the British Formula Three Championships. He won the title in the final race, after an extremely close battle with Martin Brundle. This win, coupled with that at the inaugural Macau Formula 3 Grand Prix, propelled him closer to the forefront of the motoring world.

Onto the grandest stage of all

Signing for Toleman was, more an act of desperation to drive than anything else, but turned out to be a great move. Peter Warr, at Lotus, had wanted to replace Nigel Mansell with Senna, but was not able to do so due to sponsors, Imperial Tobacco, wanting a British driver (now where else have we seen this?).

The first steps in a gloriously decorated career, was scoring his first World Championship point, in South Africa, at only his second race. The Monaco GP of that year he gained his first ever podium. He had in fact passed Alain Prost for the lead, but due to technicalities in the way the race was stopped (due to adverse weather conditions), Prost was awarded the win. He had been catching Prost at a staggering 4 seconds per lap!

The rest, as they say, is history

Commenting on how brilliant he was almost seems pointless. The tributes to him are close to endless. A Google search alone returns 13, 200,000 results. For this reason I have decided to merely include a link to his tribute page, on the official Formula One page.

The fall from grace of a champion is never nice to watch at the best of times. This is not something Senna was afforded the chance of, due to his death at Imola 1994. That fateful day will be remembered by so many, for so many different reasons. Schumacher fell from grace after his return to the sport in 2010, adding further weight to the argument of going out on a high.

A true mark of respect 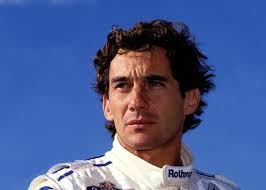 7 responses to “On this day: The life and death of a great – Senna”