Back in home Chambers. It’s 01:40 and I’ve just completed the following. News round up and comment back tomorrow.

I mentioned in one of my previous posts from Jerez the TJ13 vision. However, seeing as we have not yet consigned this to parchment, framed upon my wall, forgive me if the wording varies. The essential element of the vision is, ‘bringing fans closer to F1 by pushing social media boundaries’.

I know that many of you simply visit this blog via your web browser and have no interest in face book, linked in, twitter et al – and that is fine by me.

However, I have been on a technological and experiential journey over the past year and it has not been intentional in any way. My technological advances in social media have been typified by the need to do something fast – and so I learn to do it myself or with some quick help with the tools available.

Twitter was one of those things I had no time for. In days of yore, I couldn’t be doing with people telling me they’d just eaten lettuce, been to the toilet or woken up at 2 in the afternoon. Those kind of posts epitomised twitter for me.

Yet I’ve learned through F1 that twitter is so much more. Some of the F1 teams have embraced twitter, but it appears they fit mostly into the category of those disseminating infomation about lettuce, toilets and waking patterns.

On Friday morning, I was thinking about people sat at home watching test feeds from the BBC and sites similar to this. I remember doing this myself in 2012 during the 1st Barcelona test. The BBC text feed is on a page on their site which is updated with a new paragraph every 5-10 minutes but it is run buy people back in the UK. Whilst they do a pretty good job, they are not on location and the whole feed is predominently set against the constant reporting of lap times – which in Jerez are not particularly relevant.

So without planning I decided to do a live report for the 25 minutes before the session began. The pictures were there for all to see, but I added some audio which requires Quick Player to be played on a computer (Free PC player) or an app on a mobile device called Voice Changer Plus.

This is what I produced. (You need Quick Time Player to hear the audio clips I posted. Its free to download).

#f1 Morning all, here’s a flavour of what’s going on.
#f1 A Renault engine breaks the stillness over th track http://v.v-p.me/aLfjw6k
#f1 And now just the other kind of tweeters http://v.v-p.me/5VN4uis
#f1 pit lane deserted and the prancing horse gurgles briefly, as though clearing its throat…silence again. 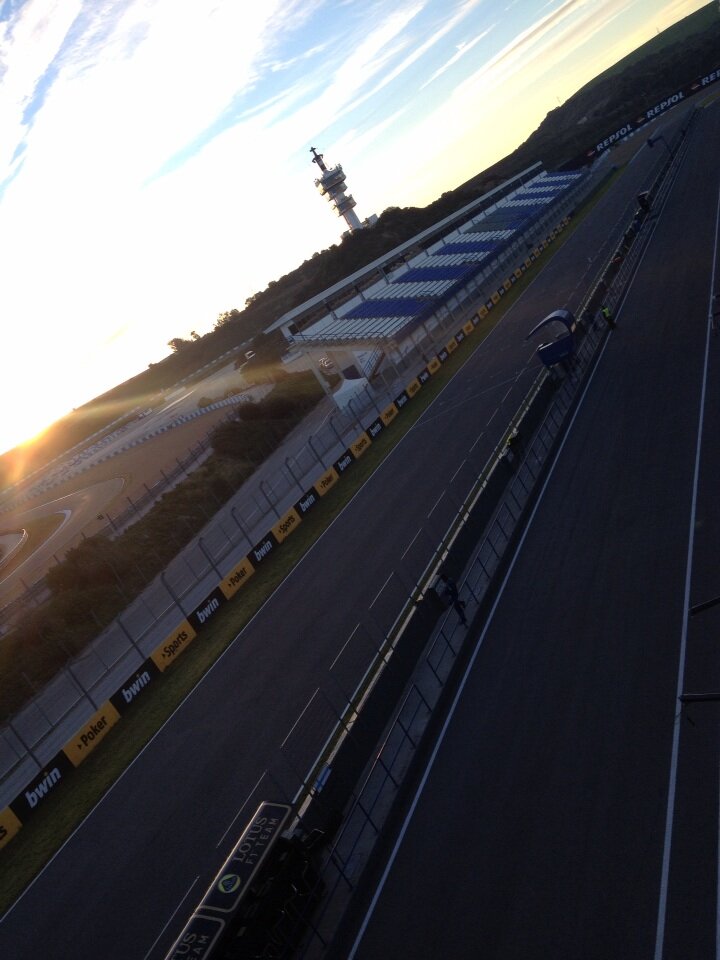 #f1 It’s cold. Very cold and just 16 mins before he presses the button for the green lights and the last day in Jerez 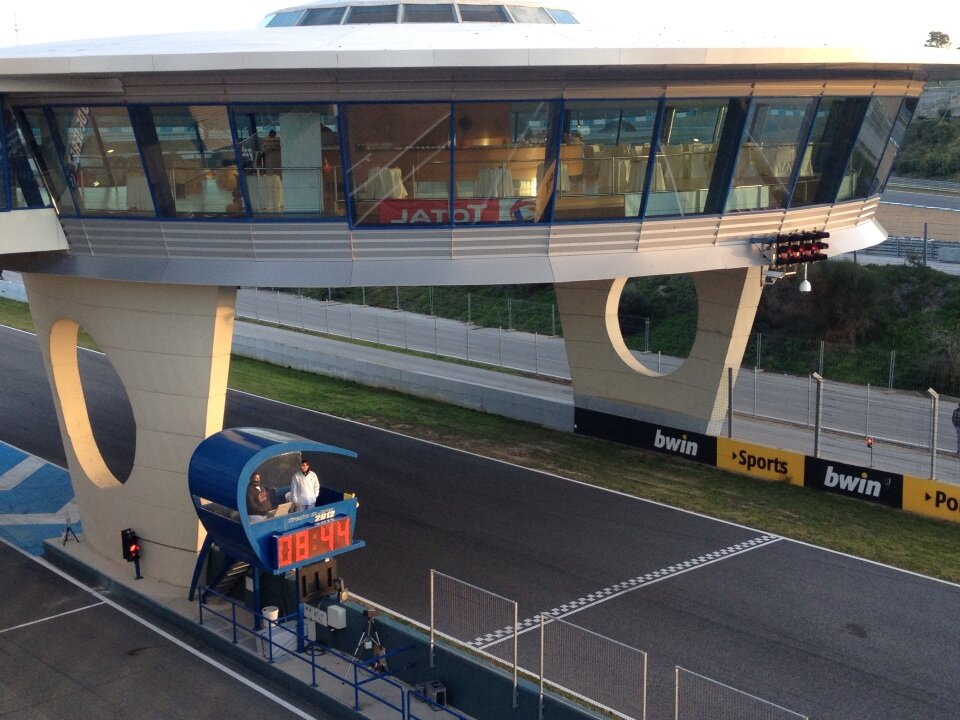 #f1 Will be easy day for PR. No corporate guests in today for breakfast. Many media left last night after Kimi
interview 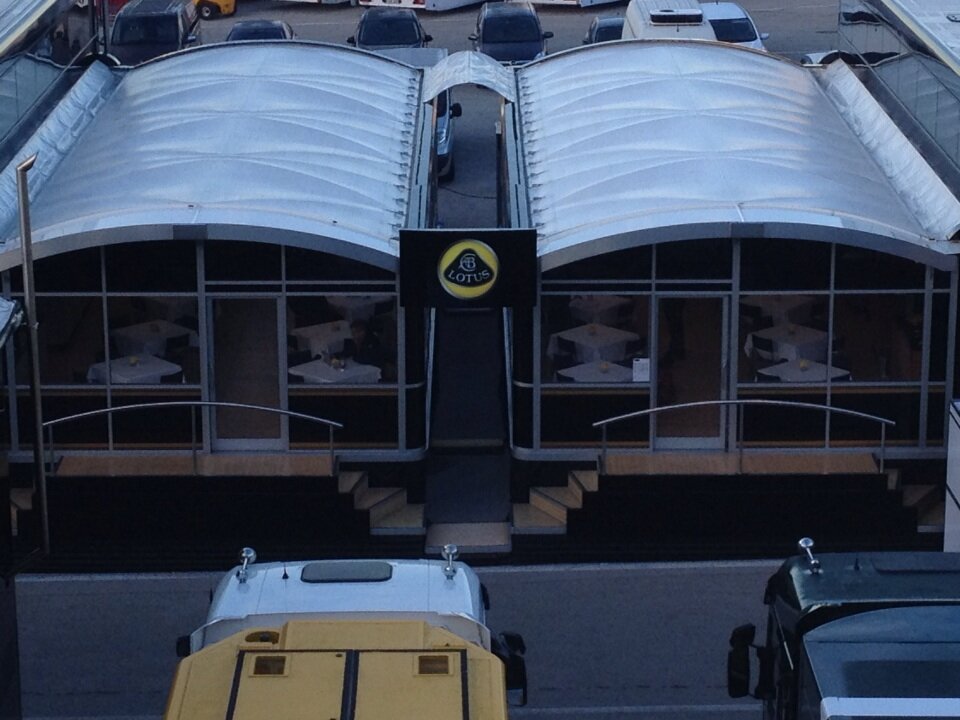 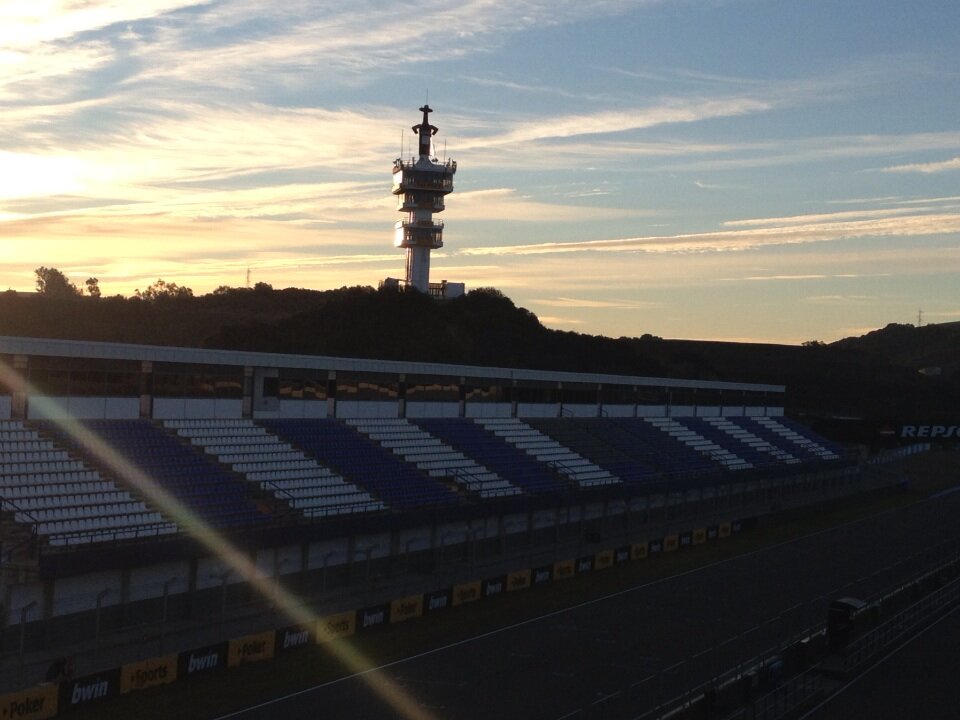 #f1 First ray of warmth hits me as in 2 minutes the sun appears from nowhere. A Merc splutters reluctantly into life. 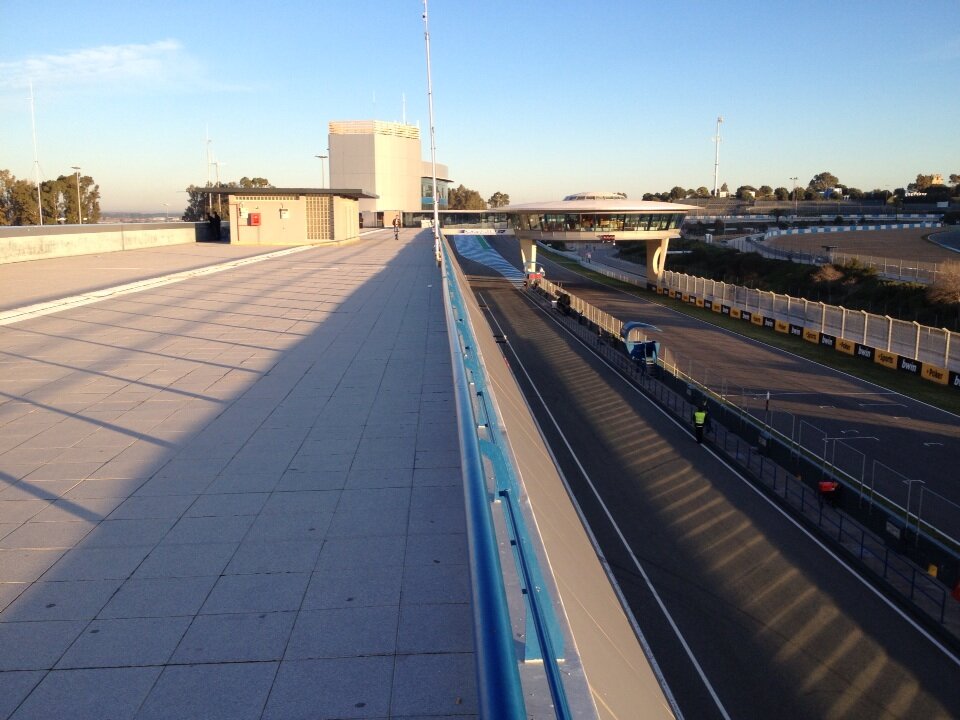 #F1 Ferrari temp hospitality looks like a high class bordello, still sleeping after an eventful evening. No one there 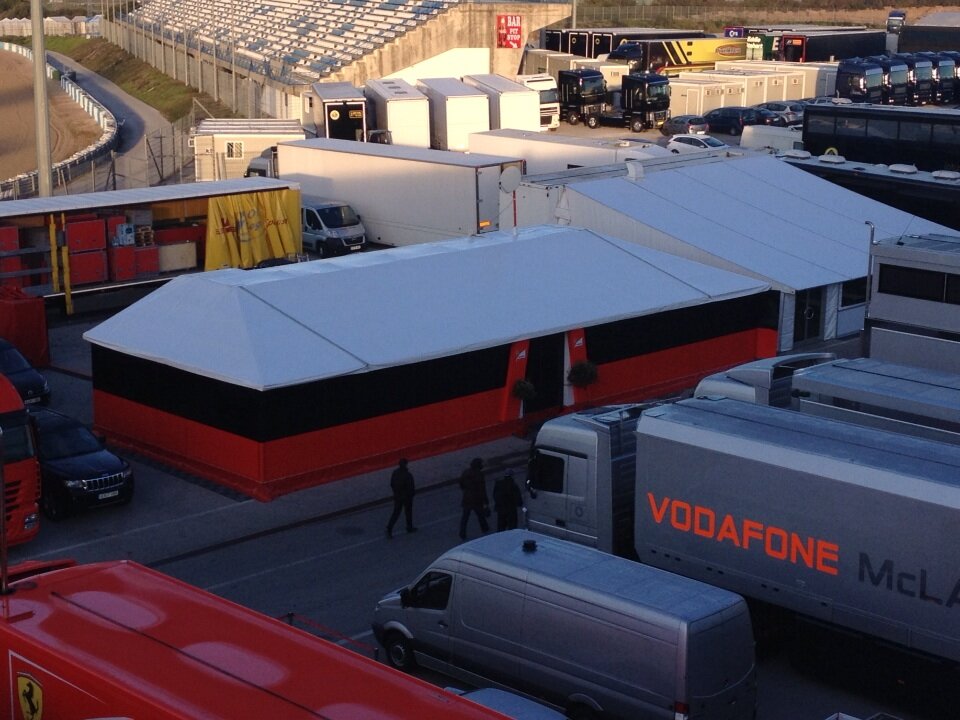 #f1 1 min to go. 7 fans in main stand the other side of the track. I can hear what they are saying. Silenced garages http://v.v-p.me/6Vk3kty
#f1 WOW. Seconds after green lights, Caterham shatters the silence, then Lotus, TR, Sauber. FI now. No more birdsong http://v.v-p.me/BS4yZi
#f1 Will try posting vid clips on YouTube. Thejudgethirteen channel. 3G poor. Let me know if they are going up please.

I hoped that gave those following an enhanced experience of what was the build up to the final days runing in Jerez.

During the week in Jerez I had seen consistent objections from F1 supporters over the lack of pictures and video from the test. I have a pretty decent video camera but you need great WIFI to send the video online. Jerez did not have this, even in our Hotel – which was not inexpensive – to send a 5MG picture was taking minutes not 15-20 seconds.

On Friday I discovered that short bursts of video on a medium resolution device such as a mobile phone could be posted via 3G to YouTube.

I then posted video clips throughout the day to thejduge13’s YouTube channel. Of course, it was from my phone which is not great as there was no zoom on the video function, but for me sat at home I think I would have loved the audio/visual experience bringing me a little closer to events in Jerez.

The following day was a filming day for McLaren. I decided to post some more video for those at home suffering withdrawal from the end of F1 testing. This was done by uploading the clips to YouTube from my phone and then tweeting a link to the relevant YouTube page to make it easy for people to click through.

Here is what I managed. I have embedded the links for your ease of use. Of course these were done live, so it really was an ‘as it is happening’ experience’. There were several minutes between some of the posts and the whole sequence took about 90 minutes to deliver.

Having arrived back in the UK I can see the quality of some of these is not great. however, that is rectifiable with a bit better technology and a change in shooting technique. Still, for the spur of a moment….

So are we feeling blue? Jerez F1 testing over. Well in my relentless pursuit to bring #f1 fans closer to the sport….

Here comes some Saturday #f1 Jerez track action from McLaren filming day. I have to be careful that my alter ego is not discovered though..

#f1 …so keep this to yourselves…and remember theUsher @thejudge13twts is watching for any contemptuous activity…here we go.

#F1 Jenson filming day. Sat after Jerez. Jenson screams out of the garage…

#F1 Track deserted and its erie to hear a solitary car. jenson Filming Jerez: Round the hill

#f1 Just met a couple of people I know – fortunately there was a phone box nearby & I just managed to change out of my judges gown in time.

Next time you see an #f1 garage packed full on TV, this is it empty. Ferrari were in here just yesterday. Jerez 2013

Have you seen a deserted #f1 pit lane? its eerie and silent. Live today from Jerez via TJ13 Internet TV

#f1 I need a phone cam with zoom I know. Bit for now this is as close as I dare go without revealing thejudge13 alter ego….

Better not get too close, or the #f1 cover of tj13 is blown…

I’ll nip the other side of the live #f1 McLaren filming for another shot. TJ13 had a coffee in there yesterday. Jerez

As close as I dare get without being Recognised. Cap pulled down low. Can’t let #f1 people know who I am

Blockbuster in the making. Jenson the movie filming live in Jerez. Part 1. “He can drive like hell to a 2nd #f1 WDC

TK13 hiding on the roof brings ypu covert shots of Jenson the Move: Part 2. “Jenson can drive but practices walking”

#f1 big discussions going on here in Jerez. Jenson the Movie has ground to a halt. He’s not happy. Remonstrating visibly with the director..

Aha. The problem was Jenson was not happy with the setup of his drivers’ boots on the asphalt. Too much understeer and a lack of grip…#f1

So here we go again. Take 2. Jenson not driving but walking the #f1drivers walk

Bugger, #F1 people I know coming up to the roof, better get out of here fast…TJ13 risks blowing his cover.

Anyone who thinks TJ13 is really #f1 s Ross Brawn’s alter ego…I suggest to check out how fast I’m travelling….

#F1 people everywhere..where to go?…TJ13 looks for a clear path of escape….

Cab of a truck…yeah.. Mrs Judges favourite hiding place…better not…lets have a peep round the front.

Think I’m in the clear…Phew…cap down..Back of #f1 Caterham truck..no one will be doing anything there of worth

Ooops…makes a change…its #f1 Go Go Go…run for it. Mrs Judge, don’t spare the horses (or horse – a Rental Corsa

According to Grand Prix Driver Association [GPDA] president Alex Wurz, F1 was right to ban drivers from wearing jewellery inside their cockpits, but should have enforced the rule in a […]

13 responses to “Reflections on Jerez. Part 3: TJ13 and Social Media”