“The expert knows more and more about less and less until he knows everything about nothing.”

Chris Murphy, the designer of the Zakspeed 871, was most certainly not an expert. Predominately the designers of Formula One machinery are scholarly individuals, ensconced in a pristine, dust-free, air-conditioned office in front of their computer (or in the case of Adrian Newey, his drawing board), etching designs to be fabricated and then tested in the wind tunnel for their definitive aero-dynamic attributes.

Murphy had no degrees in engineering or aerodynamics. He had left school at the tender age of 16 and learned technical drawing on the job while designing shutter doors – not an obvious first step in introductory car design – though maybe some knowledge of aerodynamics was useful as the wind had to blow around them. However, he was keen on cars (how many young men say they are keen on windows?) and moved upwards and onwards taking a position as a mechanic at his local garage. This was closer to cars, but not very fast ones. He got a lot closer to fast cars in his next job which was race mechanic for the Formula 2 team Maurer Motorsport.

All the diverse skills he had acquired over the years came together in 1982 when he was offered a position as a draftsman at Maurer, working with designer Paul Brown. Brown and Murphy later left Maurer to carry out cutting edge research for a carbon-fiber manufacturer in Inverness, designing and making a variety of objects out of carbon fiber – the material that would soon become the mainstay of F1 monocoque construction. 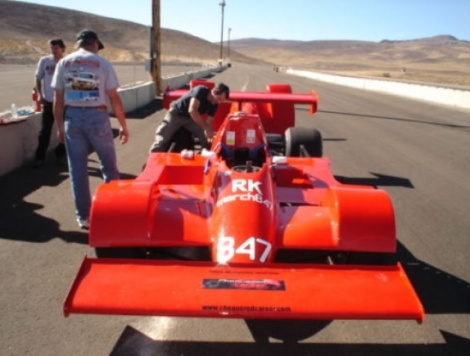 Murphy’s first car creation was when Bob Fearnley invited him to design a Can-Am car. This resulted in the RK-March 847 which was driven by Jim Crawford who achieved three race victories over the 1984 season and second place in the championship.

Paul Brown departed for Zakspeed to design their first F1 car, with Murphy joining him there shortly afterwards. When Brown left Zakspeed in 1986, Murphy was invited to design their 1987 car, the Zakspeed 871. Murphy later said, “I don’t think it was a particularly brilliant car. We were hamstrung by money in the initial design and committee decisions. We did our best with it and, I think we always got the best out of it. Fortunately we managed to get some points in one of the early races.”

The car made its debut at the San Marino Grand Prix where Martin Brundle was fortunate to be in the right place at the right time and benefited from multiple retirements in front of him. Despite having brake problems Brundle nursed the car to the finish and a 5th place which gave the exuberant team two prized points. There were considerable hopes for the car for the remainder of the season but unfortunately these were the sole points that Zakspeed would procure during their five year sojourn in Formula One.

2:07-2:48 – footage of Martin Brundle and the Zakspeed pit wall celebrating his 5th place at the 1987 San Marino Grand Prix

More evidence on the Hamilton controversy

Controversy around the FIA: Charles Leclerc had made the same mistake as Lewis Hamilton in Spa during the Belgian Grand Prix, but had not been sanctioned… The-race.com has kicked the […]

F1 conundrums No 2: Lewis Hamilton – This is the second of an occasional series of articles where an incident is chosen and then aspects of that incident considered from […]