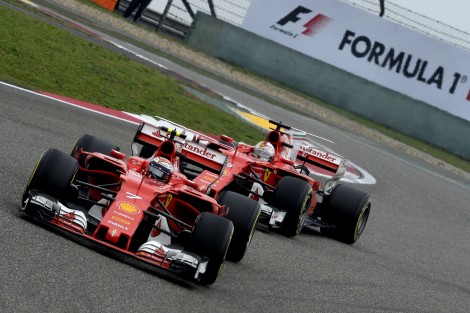 Since Ferrari has become victorious again it seems that all eyes are on them. The fans hopes are high for a ‘Schumi vs Mika’ -like battle between Vettel and Hamilton. But Ferrari’s rivals are busy trying to reveal the secrets of the Italian team, in the hope of being able to catch up. And, as ever in F1, the first accusations have been aired. Their targets? The floor of the car, the rear wing and the diffuser.

Ferrari has built a car that is fast at tracks with a high asphalt temperature, such as Melbourne, and at tracks that are considerably colder, like Shanghai last week. Furthermore, the car seems to work well with both the harder and the softer compounds of this years Pirelli tires. Data suggests that Ferrari is currently the best in the fast/flowing corners. Where as Mercedes is the best at the slower corners. But Ferrari isn’t far off their main rival, in the same slow corners. This, of course, is enough to raise some eyebrows.

Mercedes’ Toto Wolff was impressed by the handling of the Ferrari in the (fast) corners 7 and 8 of the Shanghai International Circuit. He feels like the Ferrari takes the challenge, provided by those corners, without even the slightest twitch. Ricciardo has this to say about it: “The Ferrari’s often don’t even go to the edge of the track, at the corner exit. This shows that they still have reserves.” That the Ferrari is able to drive around nearly unaffected by the “dirty air” produced by the car in front of them worries the paddock even more.

The first rumors appeared at the (winter) tests in Barcelona. Ferrari seemed to have a 2 meter long carbon strip, with temperature sensors integrated, in their floor. Engineers of various other teams questioned this, since they did not understand why Ferrari would have this. After 6 days, the carbon floor was back to the set up that was conform with the rules. It isn’t unusual for teams to test things that aren’t allowed by the rules, but even to this day no-one know what was concealed behind the strip. Except for Ferrari of course, but they are smart enough not to tell anyone.

Their rivals did try to get as much photos as possible, both in the pit and on track. According to their engineers those photos show how the surface of the floor has bent downwards at the sides and thus forms a kind of tunnel towards the road. Think of the shape of a capital ‘U’, but upside down. This could help to shield the airflow ‘under’ the car from the one ‘outside’ of the car.

In Shanghai, last week, there were slow-motion shots of Raikkonen during free practice, where you could actually see the edges on the left and right side of the floor bent down. However, the effect does not take place over the full length of the floor. Only parts of the floor seem to have this quality.

Of course this all makes us ask the same question as we did when the Red Bull Racing car, in the previous years, seemed to have moving elements (remember their front wing in 2011?).

Is all this legal?

As you may remember, the FIA had to revise their tests on moving elements, because of that Red Bull front wing. Yet at the same time Ferrari seemed to be suspected of the same thing as today. A flexible floor! Somehow people forgot that as the witch-hunt on Red Bull commenced. Anyway, the FIA measures the stiffness of the floor at two points. They used to do that with a weight of 50 kg. But after the 2011 revision this got upped to 100 kg. The two measure points are the front of the floor and on the edges just before the rear wheels.

Ferrari has, just like every other team, been tested by the FIA. And of course, the FIA haven’t found anything illegal. However, it now seems that the bending of the floor was only observed up to about 20 centimeters in front of the rear wheels. Did Ferrari outsmart the FIA? It looks as if the Ferrari floor consists of several parts, which might be the answer on the question of how they did it. But this would be a to simple solution for F1, haha. It looks like the Ferrari SF70H has an other special feature, besides its side pods.  Although the floor consists of a single piece, it looks as if it were divided into three separate segments from a bird’s eye perspective.

The middle part is significantly higher in comparison to the other two parts. It is in the middle part where the sensors are with which the temperatures of the rear tires are measured. In the pictures included you can see how the parts seem to fold over each other.

It’s anyones guess as to what more lies beneath that part. As ever with speculation, the sky is the limit. Does Ferrari occupy that area with ballast? Are the segments made of carbon structures with different stiffnesses? Are there various pipes and ducts installed inside the bulge? There are rumors of Ferrari occuping that space with pipes for transporting the oil for the gearbox. The heat-sensors might be an indication towards this rumor. However, espionage photos of rival teams from the Ferrari garage have not yet been able to show anything suspicious.

What about Ferrari’s rear wing?

But there is more to the previously mentioned photos! Apparently the photos revealed a an other feature. It looks like, while traveling near the higher speeds, the rear wing and the diffuser of the Ferrari cars flexed down, towards the track. By this Ferrari could be able to increase the top speed of the car, without decreasing the down-force to a level that it would be negative on the handling of the car through corners. This would reduce air resistance and provide a better top speed. In the Shanghai race, Mercedes and Ferrari were only separated by 0.9 kph on the long straight.

Engineers of their rival teams wonder why the Ferrari, as the only car of the field(!), has two vertical rear wing elements. Aerodynamically, that makes no sense. Each of those elements disturbs the air flow. If you have two of them, you are multiplying this negative effect. The engineers think the only reason to use two pillars are to tilt the wing specifically. Of course, like I mentioned before, this is not the first time a team gets accused of trying such tricks.

But the accusations have, of course, reached the FIA inspectors, how could they not? In F1 the rule ‘snitches get stitches’ don’t apply. But at the FIA they are relative calm about it. They say that they have the power to change their inspection methods at any time. It is not written down that the (stiffness of the) floor can only be tested on the two parts that are tested today. Just like they changed the test of the front wing. If necessary they will do the same for their rear wing test too.

Undoubtedly a story to be continued…

Update: Ferrari has modified their floor for the Bahrein GP. Special thanks to Gianlu D’Allesandro for letting me use his picture!

21 responses to “Ferrari under suspicion! (Updated)”