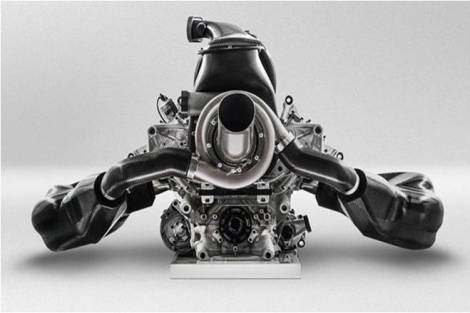 The current (and possible new) engine manufacturers have met with the FIA and the FOM in Paris, in order to discuss the Formula 1 engines of the future (2021). They have already agreed on a formula: Simpler, stronger, louder and cheaper.

On Friday (March 31 2017), the design of the future of Formula 1 was launched in Paris. All participants started with a discussion about how the engines should be like, after 2020. The current Concorde Agreement guarantees the engine manufacturers of Formula One stability until the end of 2020. But as we all know, there are many voices against the current power-plants.
The current V-6 mono turbos are too complicated, too expensive(!) and too quiet. Furthermore, the restriction to four units per car (per season) brings a certain fear to the field. Mercedes turning Lewis Hamilton’s engine performance down at the end of the Australian GP highlights that fact. This effectively numbed down the race. The general feeling on the grid is that because a driver can only drive a limited number of laps with full power, the teams feel obligated to put a leash on them. Then there is the fact that there is a planned reduction from four to three units in 2018. -Which is completely ludicrous if you ask me!- This will only increase the development costs even more. Honda representatives said the restriction to fewer engines costs a lot more than having to produce more engines. –And they should know, seeing how many they will have to produce this year, haha.-
Jean Todt, once again, mentioned the astounding progress achieved with this “hybrid generation”. The manufacturers have developed engines that have 900 to 1.000 bhp, at the moment, with 30% less fuel consumption. And they are closer than ever to the magical limit of 50% of thermal efficiency. But of course, you can’t expect Todt to be against these current engines, seeing that he had a big part in the change made. As the president of the FIA he had to make his point of view heard, once again, by everyone who was present at the meeting: the FIA, FOM and the manufacturers.
This meant that Ross Brawn took part in his first discussion (in his new role) as Technical Director of the FOM. Alongside him FIA representatives (or experts) and the engine manufactures Mercedes, Ferrari, Honda, Renault, Audi and Ilmor. For Ross Brawn, the agreement on a new engine concept, starting from 2021, is the key subject of these talks: “Before we think about a sustainable vehicle concept for Formula 1, the big question that is the engine must be clarified. Everything else depends on it.”
The first point of discussion was the road car relevance. In the future, it will only be decisive in terms of consumption and efficiency, but it does not necessarily have to include technologies that are installed on the road cars of the future. Ross Brawn justified his departure from his previous philosophy by saying that a Formula One car is far away from the relevance for the open roads because of its open wheels and aerodynamics, and therefore does not have to have a similar engine as a road car.
The next main subject was the MGU-H. Those are massively expensive and the main reason for the decrease in the sound levels, produced by the engine. Some of the manufactures also liked to know whether in the future every manufacturer must develop its own battery and its own turbocharger. Both components come close to standard components, but their development devours a lot of money and those extra efforts are not perceived by the fans.
The expert council agreed on a common goal in Paris: The costs are reduced, the technique simplified, the performance increased and the sound improved. “It is positive that so many participants could agree on a direction in which we all want to go with the engines for the Formula One World Championship.” is what a satisfied Jean Todt had to say after the meeting.  -The fact that all of them reached the same decision, so quick, should tells us just how much they hate the current engine designs.-

All participants were asked, by the FIA, to make concrete proposals, with engine specifics of their liking, within two months. An idea that you could hear over and over again, during the meeting, would be a V6 biturbo based on the current designs. These would still be linked with a strong electric machine, which derives its power exclusively from the recuperation of kinetic energy (MGU-K), perhaps even on the front axle. And all of them agree that the expensive MGU-H, which also dampens the sound, should be dropped completely.
This all should give an extra boost of up to 300 bhp. Toto Wolff said in an interview, before the meeting,  with ‘Auto Motor und Sport’ that the performance weight of MotoGP could be an example for Formula 1. In order to meet the formula “more power than down-force“, the engines would have to have 1,225 hp (calculated on the current cars). Or the cars would have to be lighter.

Another former F1 Champion lays into the Verstappen Hamilton crash

Jacques Villeneuve was already outspoken when he was active in Formula 1 – And since he has been a commentator for the French Canal+ channel during the Grand Prix, the […]

Max Verstappen has a bit more speed, but he has yet to match the experience and driving maturity of Lewis Hamilton according to Sir Jackie Stewart, former Formula 1 World […]