FIA doctor sacked: In November, during the inaugural Austin Race the FIA doctor Gary Hartstein – successor to the legendary Sid Watkins – was dismissed by the FIA. thejudge13 reported a number of his tweets expressing bewilderment and the fact that he had no explanation for why this was happening. The FIA were then and have been silent since. (tj13 article) 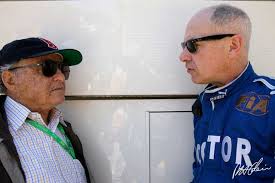 Clearly Gary has been hurt and most upset by this and in December he resorted to an extraordinary and extended expression of this hurt and anger on twitter. The twitter explosion included the following, “I might launch a crusade to get some answers, or get my f***ing job back, or let the world know what’s really going on the medical side of the FIA”. (full exchange in tj13 article).

Gary is a big favourite with all the drivers and many others in the paddock circus because he is the one who treats their ills when they are sick and need a swift recovery. Further, most would tell us he is a very decent and caring individual. There has been an unofficial campaign by the drivers to have Gary re-instated yet this appears to have had no traction.

Speedweek are reporting today that a leaked report from the FIA suggests Gary’s successor has been found – as yet we have no comment from the FIA or name. Gary was asked 10 minutes ago on twitter who he thought his successor might be and replied, “No idea. At all. You need to ask them. And if they’re comfortable with their actions, they’ll answer. If not…”.

F1 safety at risk: Gary issues a word of caution regarding the safety of the sport and the lack of transition from him to his successor, “The “they” being two people precisely. Who either don’t realise there will be a (temporary) decrement of mission readiness. Which is worrisome because anyone could’ve told them a transition was the way to go – like myself w the Prof”.

Hartstein is having a conversation with @tomwilkinsonf1 and he continues, “Or they don’t care (more likely in my mind). And this is not worrisome, it’s shameful and frightening.” Another twitter member suggests, “sounds more like blind stupidity”, to which Gary responds, “I’m not in a position to comment. For obvious reasons. I only care about the best possible medical response.” After pausing, Harstein then adds, “Not stupidity. Vindictiveness, pettiness, nastiness. And an insularity and impunity that shocks and dismays”.

The ex-FIA doctor had put his overalls up for auction over New Year,  saying he wouldn’t need them again and the money might as well go to charity. 3rd Jan 2013 one inquirer asked if he was sure he wanted to part with these and Gary responded, “I’m fine. Did the best job I could. Mostly the whole paddock respects me. Only two people who don’t are the ones who fired me!. I have no real use for them and my memories don’t require this cloth – plus I have another set that my gf wears to go karting 🙂

The man behind the sacking: In an attempt to discover who Hartstein is referring to another inquirer suggested, “Hopefully if as is now expected Bernie departs you will return, The drivers will be happier with your experience as their safety net”. Surprisingly for some it is not Mr. E who is behind this plot. Harstein responds assertively, “Bernie has nothing to do with my firing – he has been very supportive. He is a spectacular person, ‘known’ to the public via the press. I’ve seen another side and I love him dearly”.

It is clear from another exchange the identity of 1 person Gary holds responsible for his exit. Regarding the overall’s, @braveheart24 suggests, “you may need them again! JT [Jean Todt] is not king”, and Harstein’s curt response is “We’ll see. Meanwhile he hires . . . and fires . . . FIA staff”.

For those of you who follow F1 on twitter you’ll be aware of the well known fans who call themselves ‘Fake Charlie Whiting’ and ‘@TheF1Poet’ – for those who don’t – they are regular tweeters and interact with a number of paddock folk . TheF1Poet tries to cheer up the doctor and assures him, “we’ll keep you entertained Doc. If you happen to venture to Montreal in June, we’ll even buy you beer”.

Gary responds, “I so like the Canadian GP. Had VIP tix [tickets] to Cirque du Soleil in 2012, met Guy Laliberté. Totally completely unforgettable” to which the ‘Fake Charlie Whiting’ encouragingly suggests, “I hope you keep coming for that race, Gary. I love Montreal!”.

Many people may think all who exit F1 do so rich and famous, clearly this is not the case as Gary responds, ” Unfortunately if it’s not to work, I’ll have neither the time (day job and all) nor the money to be there. Pity!”

What’s the big secret? In a parting shot across the FIA’s bows Gary concludes there may not be anyone yet identified to replace him the FIA leak is designed to shore up confidence, “Actually, nothing would surprise me given their lack of thought, concern and planning around this whole affair”.

There is a very interesting story to be told and we are not hearing it. It is not unusual for people in F1 to be ‘dispatched” quickly and without comment. Adam Parr discovered this following his criticism of Bernie Ecclestone’s future revenue model for F1. Parr questioned why F1 was only receiving the same amount of money for its global TV rights that Turkish football was getting for its annual TV coverage. 9 months later Parr fell on his sword.

Most likely Gary has insisted upon some kind of change in the way things are done, and this has not gone down well with Monsieur Todt. Had Harstein been dismissed for negligence, he would surely be keeping his head down rather than seething with rage in a very public manner.

Some today have been criticising Gary Hartstein for not telling the world what the specific nature of the dispute is, but you must remember he may have a legal case yet to bring and hence cannot be so specific in any allegations.

What is suspicious that the FIA have made no comment at all, or given even the usual bland cursory explanation for the removal of their senior medical officer. However, it is clearly not ‘by mutual consent’ or for Gary to ‘spend more time with his family’. Just another example of what is woefully wrong with the culture of F1.

Part 2 of the story: Here

Please add your thoughts and comments in the ‘comments’ section at the bottom. If you cannot see this click on the orange title (rather than staying on the home page) and you will see the box for adding your comments.

Help us understand how many people regularly read thejudge13 by following the blog in 1 of 3 ways.

3) Out latest addition to facilitate a convenient way for you to follow tj13 is the 2 RSS feeds at the bottom of the right hand bar for those of you who know how to use them for updates.